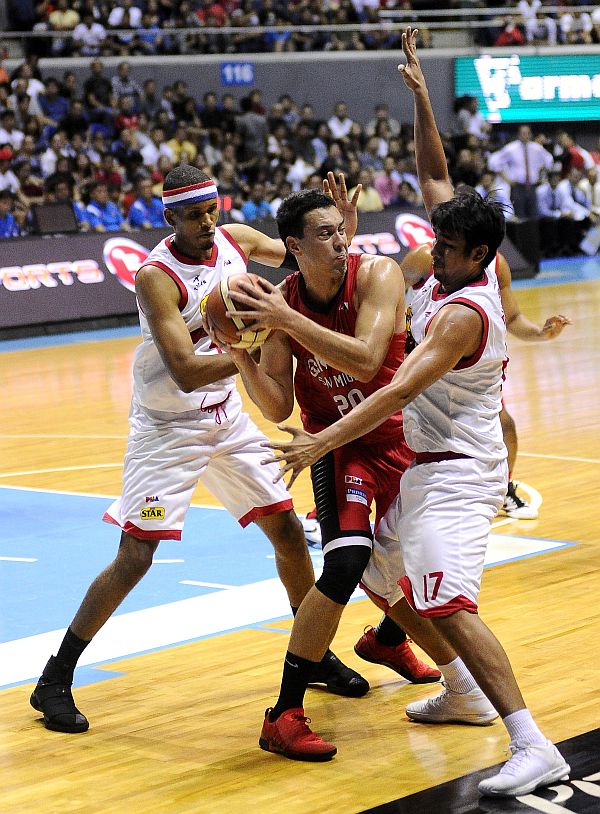 Greg Slaughter of Ginebra is double teamed by Rafi Reavis and Aldreach Ramos of Star Hotshots in their previous game last Sunday.
INQUIRER

FIVE DAYS removed from an adrenaline-pumping win in front of the biggest crowd in the PBA Governors’ Cup that extended the conference’s longest winning streak, Barangay Ginebra returns to action on Friday night trying to sustain that intensity critical at this stage of the elimination round.

With a playoff berth already in the bag, the Gin Kings can’t afford to slack one bit as a Blackwater crew willing to confirm its new-found respect while enhancing its own playoff drive, will be out for blood in the 7 p.m. contest at Mall of Asia Arena in Pasay.

Ginebra will be coming off an epic 105-101 overtime victory over Star on Sunday, a match that draws thousands and spikes television ratings.

The defending champion Kings will not be playing against a team of similar caliber – or following – and they cannot afford to come out with less intensity they did when they conquered the Hotshots for it could prove costly with the Elite also on a respectable run.

Blackwater has won four of its last five games since suiting up Henry Walker, and the Elite will be coming off a franchise-best performance in bamboozling KIA Picanto a week ago.

Ginebra will be the wearier team coming into this game, but it was a victory that obviously sharpened the Gin Kings, who won a close game for the first time in their six-match winning streak.