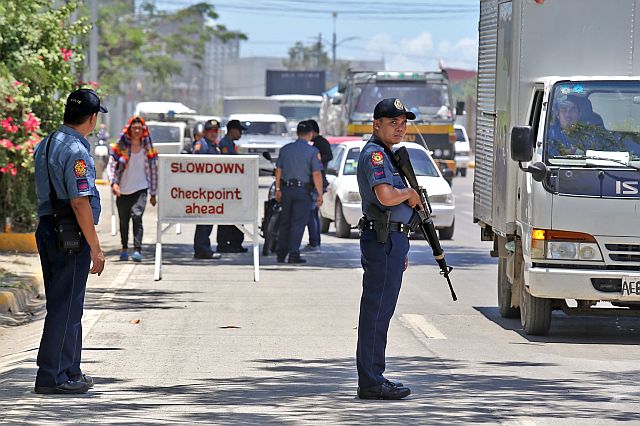 Beginning today, expect more police visibility in public areas in Cebu, with more checkpoints set up by Philippine National Police (PNP) units across the province in compliance with the ban on the carrying of firearms and other deadly weapons.

As the country awaits the signing of the law postponing the barangay and youth elections, the Commission on Elections (Comelec) told the public that the election period has began yesterday, Sunday, October 1.

The poll body cautioned the public of poll-related prohibitions to be enforced during the election period from Oct. 1 to 30, particularly the election gun ban.

The Comelec issued the reminder as it awaits President Rodrigo Duterte to sign the law postponing the barangay and Sangguniang Kabataan elections from October 23, 2017 to May 2018.

In a statement on Sunday, Comelec spokesperson James Jimenez stressed that violating the election gun ban, as well as the other prohibitions, will be considered an election offense.

Jimenez said violations of the election prohibitions will come with one to six years imprisonment, disqualification from public office and deprivation of the right to suffrage.

At least one Comelec checkpoint will be established in each city or municipality beginning 12:01 am of October 1 to effectively implement the election gun ban.

However, additional police or military checkpoints will be established in coordination with the election officer having jurisdiction over the city or municipality.

The filing of the certificates of candidacy will be from October 5 to 11, while the campaign period will run from Oct. 12 to 22.

So far, no one in Cebu has been caught violating the gun ban, said Chief Supt. Jose Mario Espino, the director of the Police Regional Office in Central Visayas (PRO-7).

He said they would simultaneously go after loose firearms under Oplan Paglalansag, but those caught in raids would not be charged with violating the gun ban but would face illegal possession of firearm charges.

Espino said he expected to meet with Comelec officials in Central Visayas soon to discuss security issues and other matters related to the barangay and Sangguniang Kabataan elections.

“We are waiting for the coordinating meetings with the Comelec officials, but the PNP is already prepared to implement security for every polling precinct that will be designated by the Comelec,” Espino said.

Senior Supt. Joel Doria, the chief of the Cebu City Police Office (CCPO), on the other hand stressed that off duty policemen would not be exempted from the gun ban. Policemen could carry firearms only if they have secured an exemption from the Comelec, he added.

Doria also stressed that licensed gun owners are likewise prohibited from carrying or transporting firearms during the election period.

Barangay officials were also prohibited from having security personnel or bodyguards.

He asked the public for understanding and cooperation with policemen manning checkpoints and assured that all the inspections will be done in plain view of everyone.

“Pakiusap natin na sila ay mo-cooperate para mapabilis ang proseso. Rest assured ang aming kapulisan ay plain view ang gagawin (We are enjoining the public to cooperate so that we can speed up the process of inspections. Rest assured that our policemen will do the inspection in plain view),” he said.

Cebu Provincial Election Supervisor Lionel Castillano, meanwhile, stressed that village officials caught violating the gun or the prohibition on having bodyguards could result to their perpetual disqualification from public office.

Espino, on the other hand, said he has reminded police personnel to follow the standard operating procedures in conducting checkpoints.

Earlier, some policemen in Mandaue City received complaints from motorists, after they were forced to undergo body search and bag inspections.

“Any violation of this procedure, these policemen will be appropriately investigated and be administratively charged. We conducted already investigation against policemen involved in Mandaue City, and we are waiting for the result from MCPO (Mandaue City Police Office),” Espino stated.

Espino further advised policemen to be courteous in handling motorists during the conduct of checkpoints.

He also advised motorists to cooperate with the checkpoints and positively undergo the procedure in plain view.

Mandaue City Election Officer Anna Fleur Gujilde said in a dyAB interview on Sunday that MCPO elements had already arrested a person carrying a bladed weapon in an early morning raid in the city.

She stressed that being caught carrying a bladed weapon or a knife, an air soft rifle, or even a toy gun is considered as a violation to the gun ban.

She said those found guilty of violating the gun ban could be imprisoned for a year and a half.

She also said they already printed the voters’ list and they are ready for the start of the filing of the certificates of candidates on October 5.

She reminded those who would file their certificates of candidacy to fill up the right COCs because the forms for those running for barangay captains and barangay councilors are different.

When asked if the COC forms that have been printed with the date of the Oct. 23 elections could still be used in the May 2018 elections if this month’s voter’s exercise would be postponed, she said it would be a matter that would have to be decided by the Comelec en banc. /WITH INQUIRER.NET