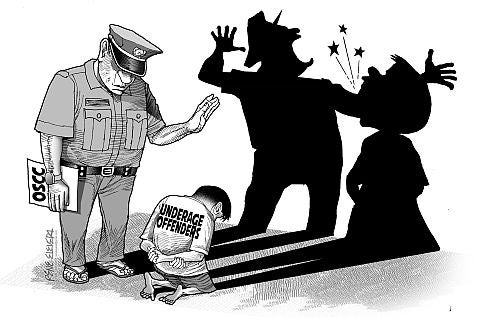 Unrelated though they may be, their common denominator lies in the fact that it has become quite the bigger problem to discipline and rehabilitate offenders regardless of age and background.

In the case of the OSCC detainees or “residents,” as Cebu City Councilor Margot Osmeña preferred to call them, the statements of the officials and the security guards on their show of defiance is overwhelmingly against them.

There is no justification for their dangerously petulant behavior that resulted in injuries on one of the guards who was trying to maintain discipline.

The riot or noise barrage stemmed from the desire of the detainees to play basketball.

One of the detainees claimed they were angered by the show of firearms by the guards, but if there is truth to the claim that they were anxious about their impending transfer to a regular jail, then creating a riot or noise barrage may grab the attention of authorities but not their sympathy and consideration.

It’s downright difficult to impose discipline and rehabilitate underaged offenders since they usually come from indigent backgrounds and have been neglected by their parents.

Yet while the state can do all it can to bring some sense of normalcy and balance into the lives of these underaged offenders, the state is not their parents, and sooner or later, it is up to these detainees to decide whether or not they want to rejoin society or continue in their rebellious, irresponsible and destructive ways.

And it doesn’t look good for these OSCC detainees who are said to be over 18 years old and are thus expected to be mature enough to be accountable for their actions.

The state cannot babysit them forever, and in the back of their minds, they know it. What they don’t know is that they can take it upon themselves to change their ways and maybe get the chance to start rebuilding their lives from scratch.

That opportunity to start fresh anew was lost among the three Umpad brothers Jerome, John Vincent and Ruben, who were supposedly caught with packets of shabu and allegedly engaged in a shootout with police at the CICC.

That the three men had just been released courtesy of the Enhanced Justice on Wheels Program by the Supreme Court showed that there is no guarantee of reform and repentance on past offenders if they were released from prison.

It remains to be seen whether it was a shootout or an execution of the three brothers as claimed by their mother. What is clear is that the burden of proof of innocence, rightly or wrongly, lies squarely on the shoulders of jailed offenders and they should earn public trust if they hope to rejoin society.