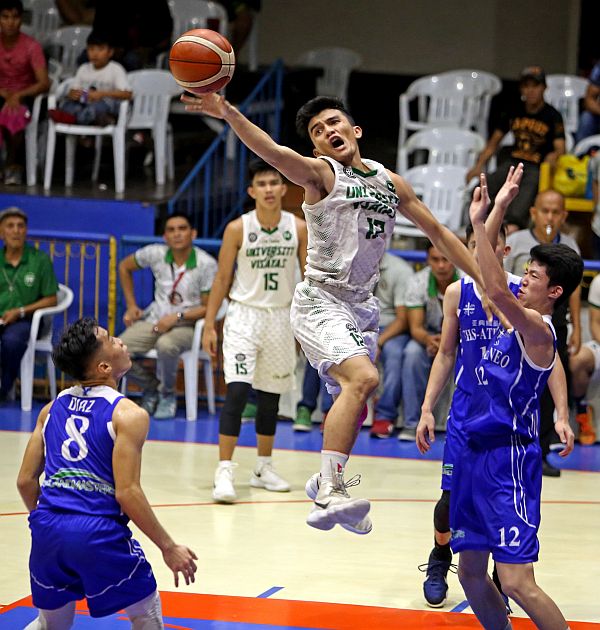 The University of the Visayas (UV) Baby Lancers are a win away from ending the dynasty of the Sacred Heart School-Ateneo de Cebu after they upended the Magis Eagles, 69-59, in a highly physical Game 1 of the best-of-three finals in the 17th Cesafi high school basketball tournament last night at the Cebu Coliseum.

With their 14-point lead eradicated and the game hanging in the balance, veterans Jim Paul Amistoso, Beirn Laurente and Joshua Yerro teamed up to score the game’s most crucial buckets for UV to put down the four-time defending champions Magis Eagles and take a 1-0 lead.

UV can claim its first title in five years with a win in Game 2 tomorrow.

The Baby Lancers led by as many as 14 in the first half but collapsed, allowing the Magis Eagles to overtake them, 47-46.

Amistoso shed his defender with a nasty crossover and layup that shoved UV ahead, 48-47, heading to the last canto.

Ateneo de Cebu pulled to within three, 54-57, with five straight points, but Amistoso stepped up once again, scoring a scoop shot before Laurente completed a three-point play to push UV’s lead back to eight with 3:37 to go.

Patrick Yu swished in a triple to give the Magis Eagles some life but that proved to be their last breath as Yerro drained a three and a fastbreak lay-in before Jhiey Paraldo canned a free-throw line jumper to put the game away for good.

Laurente led UV with 14 points while Yerro played the game of his life, scoring 11 markers to go with 12 rebounds, five assists and three steals. Amistoso also had 11, adding four boards and five dimes to his name. Paraldo finished with 10.

Yu and Christian Manaytay led the way for Ateneo de Cebu with 13 each while Jed Colonia pitched in 11, albeit on a 4-of-13 shooting clip.