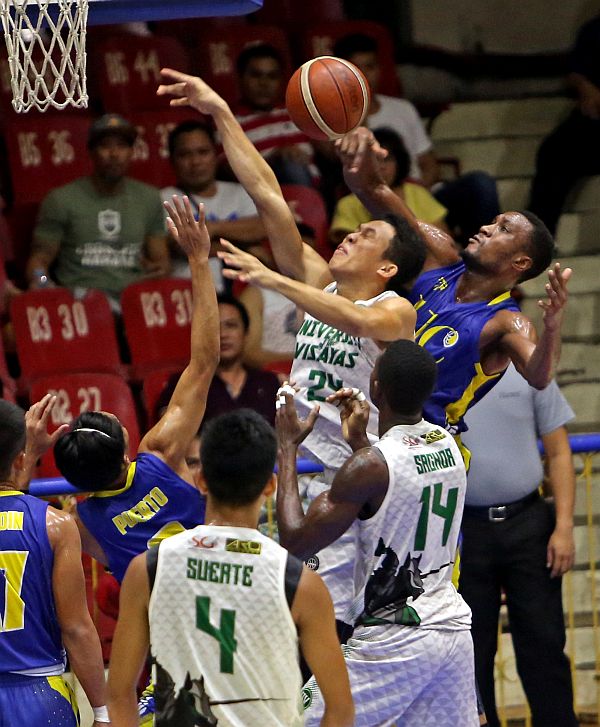 \Frederick Elombi of UC blocks UV’s Jason Balabag from behind in Game 1 of the Cesafi men’s basketball finals at the Cebu Coliseum. UC won this game but eventually lost the series to the 12-time champions Green Lancers.
(CDN PHOTO/LITO TECSON)

Down but not defeated, the University of Cebu’s (UC) Cameroonian forward Frederick Elombi boldly vowed to give the Webmasters the Cesafi championship next season.

Breaking his silence after putting up a dud of a game — three points on 0-for-10 shooting — in the biggest game of UC’s season, a performance that factored into their 56-69 loss to the University of the Visayas (UV) in Game Three of the Cesafi finals, Elombi said he cherished the ride even though the result wasn’t what they wanted.

“It’s been an awesome experience even though we lost,” said the 20-year-old recruit from Douala in Cameroon.

Hobbled by the flu, Elombi just wasn’t able to get it going on the offensive end in the season’s deciding game, resulting in a gloomy end to what has been a dominant debut where he averaged over 20 points and 13 rebounds per game.

“It wasn’t easy getting to the top. It was a challenge, but I thank God and the coaches for their support and my teammates for believing in me,” the mild-mannered forward known as “Le Boy” to teammates and friends.

With Game Three behind him, Elombi has already set his sights on a productive offseason where he promised to work on his rebounding skills and free-throw shooting, not to mention his academic responsibilities.

“I will focus on my studies and work hard for the upcoming season,” Elombi said.

In closing, the soft-spoken had a bold declaration and an ominous warning to the rest of the league next season, saying, “Expect UC to get the championship.”