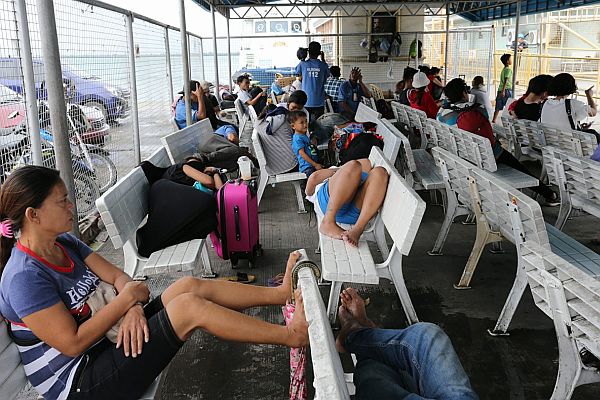 Passengers bound for Tubigon, Bohol, and Ormoc City wait outside Terminal 1 of Pier 1, Cebu City, after the Philippine Coast Guard–Cebu Station canceled trips bound for these areas on Friday, October 20, 2017, due to the gale warning issued by the state weather bureau amid a bad weather spawned by Typhoon Paolo.
CDN PHOTO/JUNJIE MENDOZA

After spending two months in Cebu as part of her internship program, tourism student Marisa Redoloza was excited to go back to her hometown in Naval, Leyte, yesterday.

But the prevailing bad weather yesterday dampened her mood as authorities prohibited the ferry that was supposed to carry her back to Naval town in the adjoining island of Leyte, over 248 kilometers northeast of Cebu City, from sailing.

“We were already on board the ferry, but around ten minutes later, all of us were instructed by the crew to disembark. Then they announced that our trip was canceled due to big waves,” Redoloza said.

The Cebu-Naval voyage of Lite Shipping Corporation, which was supposed to depart from Cebu City’s Pier 1 at 1 p.m., was just one of the over 35 sea trips leaving the ports of Cebu that were canceled yesterday due to rough seas spawned by Typhoon Paolo.

Redoloza was among over 200 passengers stranded in Pier 1 following the cancellation of trips of small seacraft that ply routes between Cebu and the adjoining islands of Leyte and Bohol.

There were actually more than 500 passengers affected by the canceled trips, but most opted to return to their homes in Cebu or stayed with friends and relatives in the city, Cebu Ports Authority (CPA) operations officer Kenneth Nacario told Cebu Daily News yesterday.

While Typhoon Paolo was heading towards the northeastern part of Luzon and was spotted 840 kilometers east of Basco, Batanes, on Friday afternoon, its circulation of 1,350 km was “really wide” and affecting the entire country, said Evangeline Tolentino, Weather Specialist II of the Philippine Atmospheric, Geophysical and Astronomical Services Administration (Pagasa) in Mactan.

Nacario said that at least 35 trips were canceled after the Philippine Coast Guard–Cebu Station (PCG-Cebu) issued an advisory on Thursday prohibiting the departure of sea vessels with gross tonnage of less than 250, in accordance with the gale warning raised by Pagasa.

Since Thursday, all fast craft trips between Tagbilaran City in Bohol and Cebu City had been canceled, he said.

By Friday, Nacario said PCG-Cebu added to the canceled list the motorized boat trips between Cebu and the towns of Getafe and Tubigon in Bohol; those bound for Ormoc City and Naval town in Leyte; and for Dapitan City in Zamboanga del Norte.

The PCG, however, permitted the departure of larger ships over 250 gross tons, most of which were bound for Luzon and Mindanao.

According to Nacario, they will wait for an advisory from PCG-Cebu as to when they could lift the order to prohibit the departure of small seacraft.

The vessel departed from the Ouano Wharf in Mandaue City at noon yesterday, but an hour later, PCG-Cebu received a call from the ship’s crew asking to be rescued as waters have entered the vessel.

At 5:46 p.m. yesterday, the vessel was safely pulled back to Ouano Wharf by two tugboats owned by Lite Shipping. All its 14 passengers and crew were unharmed, said PCG-Cebu officer Francis Garcia.

Meanwhile the Cebu Provincial Disaster Risk Reduction and Management Office (PDRRMO) advised motorists not to travel through the Cebu Transcentral Highway due to incidents of minor rock slides and strong winds that may uproot trees and other debris.

PDRRMO Chief Baltazar Tribunalo said they also ordered the disaster response teams in all local government units (LGUs) of Cebu province to monitor landslide and flood-prone areas round the clock.

“In anticipation with the rainy weather we’re experiencing, our responders are tasked to monitor 24/7 areas that are prone to landslide and floods. This applies to all LGUs,” Tribunalo said in a text message to reporters yesterday.

Pagasa, meanwhile, reported that Paolo caused moderate to heavy rainfall especially in the Visayas, Bicol Region, Mimaropa (Mindoro, Marinduque, Romblon and Palawan) and Zamboanga Peninsula. The weather system packed a maximum sustained winds of 145 kilometers per hour (kph) near the center and gustiness of up to 180 kph.

The towns in the southern part of Cebu, according to Tolentino, experienced more rainfall and thunderstorms on Friday afternoon.

The islands of Samar, Leyte, Bohol, Cebu, Negros, Siquijor, Guimaras, Panay and Boracay were warned of big waves reaching to up to 4.5 meters and wind force of 52 to 63 knots.

Fishing boats and other small passenger sea vessels are advised to not venture out into the sea as strong winds and current may bring danger.

“The low pressure area was weak, so it was absorbed by the typhoon. We’re now monitoring just one system, which is the typhoon,” Tolentino explained partly in Cebuano.

As of 7 p.m. Friday, Typhoon Paolo was 865 km east of Basco, Batanes. It was expected to be outside of the Philippine area of responsibility by this weekend. As the typhoon moves farther, a better weather condition can be felt in Visayas by Monday, Pagasa said.