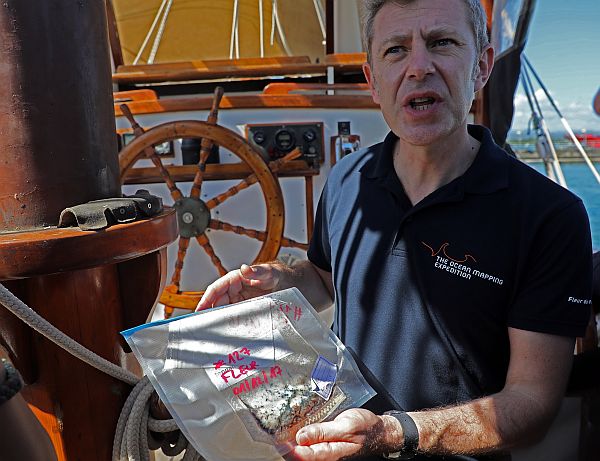 Samuel Gardaz, vice president for corporate affairs of Fondation Pacifique shows samples of plastic particles they collected in their trips on board the Fleur de Passion (below) that was docked at the Cebu Yacht Club in Lapu-Lapu City.
CDN Photos/Tonee Despojo

Aboard the 33-meter-long Swiss sailboat “Fleur de Passion,” the 12-man crew of the expedition headed by the Swiss Geneva-based Fondation Pacifique said they are merely giving their own input on the global pollution problem.

“We don’t pretend to solve anything by ourselves. … Our main goal is bringing added value to the scientific community through reference and field data,” said Samuel Gardaz, vice president for corporate affairs of Fondation Pacifique.

During a media tour of the sailboat yesterday afternoon at the Cebu Yacht Club, Gardaz said “there is no existing mapping of the ocean on such a scale on microplastics.”

The expedition started in 2015 at Seville, Spain. Over the past two years, the boat has made stops in at least 15 countries including Morocco, Brazil, Argentina, Chile, Australia, Indonesia and the Philippines.

It is expected to end by 2019 back in Seville. Gardaz said they collected 132 water samplings in different areas since 2015.

The samples were sent to the University of Geneva where it was analyzed by scientists and experts.

They are also gathering data on noise pollution underwater using a hydrophone.

As for coral bleaching, Gardaz said they also do dives and snorkeling in some areas to take data on the levels of coral bleaching in these sample areas.

For the greenhouse gases, a monitoring system has been installed on the sailboat just last week to measure the levels of methane and carbon dioxide along their expedition route.

“We have this technology where we take sample gas from a tube on top of the sailboat and we analyze the air. There’s a laser system to measure the refraction to get the levels of methane and CO2,” said Daniel McGinnis, assistant professor for aquatic physics at the University of Geneva.

He is also a part of the crew. McGinnis said the past few days that they stayed in Lapu-Lapu City showed carbon dioxide levels have been “a little bit high” while methane levels are normal.

All the data gathered during the four-year expedition will be turned over to their partner organizations, Gardaz said.

“Those scientific partners are in charge of analyzing the data and maybe put these in publications and raise awareness of the problem,” he said.

He said the ocean mapping expedition is inspired by the first ever circumnavigation by Ferdinand Magellan almost 500 years ago.