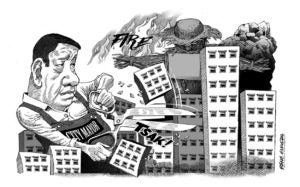 Cebu City Mayor Tomas Osmeña’s announcement to impose a literal ceiling on the height of buildings or structures in the city in the wake of last Friday’s fire that mostly consumed the Metro Ayala store building may have been a belated move, but it serves notice to developers and managements on the extra care and diligence they should exercise in protecting their customers and their properties.

The construction boom that marked Metro Cebu’s economy encouraged developers to outdo themselves each and every time in order to lure in more buyers and clients and while economic activity should be encouraged, local officials should be all the more vigilant in reminding and requiring them to comply with all safety requirements.

But apparently, mere lip service and minimal compliance of safety requirements aren’t enough to prevent a repeat of last Friday’s incident. And it’s not just about the lack of equipment of the Bureau of Fire Protection (BFP), though it is a factor to be considered.

The height restrictions is but a practical approach to limit the risk not only of fires but natural calamities like earthquakes that can easily damage the structures and compromise public safety.

Unlike First World countries and those in the Middle East where its officials and rulers can afford to compete with each other in building the tallest, most opulent buildings and hotels in the world, the Philippines in general and Cebu in particular should evaluate its perspective on what kind of buildings and structures to build and sell to their clients, given the limited emergency rescue capabilities of its host local governments.

In fact, the reason why structures have been rising as of late is to allow developers to pack in as many customers/occupants as possible given the limited land area allocated for development.

But in Cebu City’s case, Osmeña is suggesting that developers should build twin tower-type structures. What’s surprising is that Engineer Josefa Ylanan, chief of the Office of the Building Official, suggested that buildings should not be more than 20 floors.

If Cebu City’s firefighters are incapable of rescuing people located 18 floors above during calamities like fires even with an 18 storey ladder, what makes Engr. Ylanan think that they can do it on buildings standing 20 floors?

There are ways for developers to maximize living and business space for their clients but it may be better to adopt a more pragmatic mindset towards development projects in the light of last week’s fire.

If anything, fewer taller buildings may mean not only a reduced incidence of high rise fires but more living space and a better view for most of Metro Cebu’s residents who had to strain their necks upward and squint their eyes to see the skyline.

Read Next
Human rights in the Age of Pop Culture