No fireworks for Sinulog Grand finale 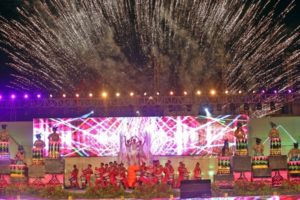 There will be some surprises in lieu of the fireworks display at the Sinulog Grand finale. Revelers can get their fireworks fix at the malls instead.
CDN File Photos

“There will be no fireworks. The mayor would not allow it. We stopped using fireworks since last year for the safety of the spectators and participants,” Sinulog Foundation Executive Director Ricky Ballesteros said.

The public can watch fireworks at the malls that will sponsor fireworks displays, he said.

But he said the spectators will still be in for a treat during the finale.

“Supposedly, we will paint the stage today (Monday) but it is still raining,” he said.

With the giant LED (light-emitting diode) walls they installed at the stage, Ballesteros said they still have to paint the remaining backdrop with white and gray colors.

Ballesteros said the number of dancing contingents went up due to the excitement over this year’s edition of the Sinulog.

“I think it is because of the excitement of the Sinulog. There are a lot of new choreographers and a lot of new barangays that joined for the first time,” he said.

Ballesteros also advised revelers to wear comfortable clothing and avoid wearing jewelry in order to avoid being inconvenienced and robbed.

“Drink a lot of fluids, and bring water always. And protect yourself from sun or rain,” he said.

Those bringing along family and friends should plan ahead on where they will meet, in case of cell phone signal disruption.

Read Next
Luigi not okay with Sinulog street parties