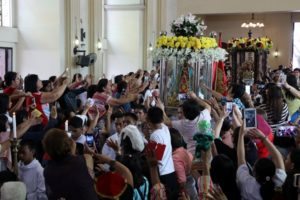 The sacred images of Our Lady of Guadalupe de Cebu and Santo NiÑo de Cebu arrive at the National Shrine of St. Joseph in Mandaue City at exactly 9 a.m., Friday, after a two-hour motorcade from the Basilica Minore del Santo NiÑo. Devotees had waited hours to greet the images as a way to honor the ones they represent.
CDN PHOTO/TONEE DESPOJO

Despite taking a longer route, the Traslacion motorcade that brought the images of Señor Sto. Niño and Our Lady of Guadalupe to Mandaue City on Friday arrived on time.

The sacred icons reached the National Shrine of St. Joseph at exactly 9 a.m., two hours after they left the basilica on board two separate pick up vehicles.

Fr. Ric Anthony Reyes, OSA, spokesperson of the basilica, said wider roads made for a smooth and orderly convoy that traversed a 10- kilometer route.

“We recognize the efforts of the organizing committee for the Traslacion. As it was in previous years, the size of the crowd only shows that the Sto. Niño continues to be the ‘Batobalani sa Gugma’ (Magnet of Love). He just never fails to capture our hearts,” he told Cebu Daily News.

About 10,000 people, many of whom went out of their workplaces and homes, waited by the roadside, waving their hands and holding flaglets, as the images of the Sto. Niño and the Virgin Mary passed by in the annual ritual transfer.

Cebu City Mayor Tomas Osmeña, his wife Cebu City Councilor Margot Osmeña, and son Miguel, escorted the images from the basilica to the border of the cities of Cebu and Mandaue in Barangay Banilad where they were welcomed by officials of Mandaue City led by Mayor Luigi Quisumbing and Vice Mayor Carlo Fortuna.

Residents and office workers set up mini altars of the Sto. Niño and other sacred images along the motorcade route while some children along A.S. Fortuna Street in Mandaue City danced the Sinulog.

Despite the prohibition, balloons still greeted the images by the roadside.

At the Mandaue church, carillon bells pealed and devotees sang “Batobalani sa Gugma” while waving their hands in the air in unison when the images arrived.

Two groups welcomed the images with Sinulog dances outside the national shrine.

The image of the child Jesus was accompanied by Augustinian priests led by Fr. Pacifico “Jun” Nohara Jr., rector of the Basilica del Sto. Niño; while the image of the Virgin Mary was escorted by Fr. Romeo “Dodong” Desuyo of the Archdiocesan Shrine of Our Lady of Guadalupe de Cebu.

Msgr. Daniel Sanico, team moderator of the National Shrine of St. Joseph and vicar general of the Archdiocese of Cebu, greeted his counterparts before presiding over the welcome Mass inside the jampacked church.

In his homily, Sanico said the Traslacion has become a part of tradition that manifests the people’s faith.

“It’s as if our hearts are squeezed as we witness the Traslacion. Take for example the long queue of people who wait for hours just to kiss the glass that contains the images of the Sto. Niño and the Our Lady of Guadalupe for a few seconds,” he said in Cebuano.

“We call upon the Sto. Niño because we admit our limitations and weaknesses. We know that God became man to be with us in our journey in life,” he added.

Sanico, however, stressed that the devotion to the Sto. Niño must lead everyone to emulate Christ’s virtues particularly humility and obedience.

He said the Sto. Niño, which is referred to as “hari nga gamay (small king)” in a song, is teaching everyone that whoever wishes to be great must be the servant of all.

“Kingship is often associated with honor, power, and authority. But for Jesus, anyone who wants to be the greatest, must be the least. Jesus, Mary, and Joseph are our models of obedience and humility,” Sanico said.

At least 90,000 people braved a chilly and wet dawn to join the Marian procession that brought the image of the Our Lady of Guadalupe from her shrine in Barangay Guadalupe to the basilica.

Fr. Manuel Tan, team moderator of the Archdiocesan Shrine of Our Lady of Guadalupe, presided over the Traslacion Mass at the basilica after the dawn procession.

In his homily, Tan explained that Catholics do not worship sacred images, but simply venerate them.

“We don’t adore images. Instead, we honor the one they represent,” he said.

But more than venerating saints, he said, is the need to take care of others, especially the poor, who are the living images of God in our midst.
“I hope that the hands we wave while singing Batobalani sa Gugma are not used in taking advantage of others,” Tan said.

He called on people to emulate the virtues of the late Cebuano Archbishop Teofilo Camomot who was known for his extreme generosity and love for the poor.

“His hands were used to please God. When we raise up our hands to praise, may we also use the same hands to help the needy and to be honest in our dealings with others,” he said.

The transfer to the National Shrine of St. Joseph in Mandaue City portrays a reunion of the Holy Family: the Child Jesus, his mother Mary, and foster father Joseph.

At 2 a.m. today, a send off Mass will be celebrated at the National Shrine of St. Joseph to be followed by a motorcade that will bring the images of the Sto. Niño and the Our Lady of Guadalupe to the Nuestra Señora de Regla National Shrine in Lapu-Lapu City for another Mass at 4 a.m.

Afterwards, the images will be brought to the Naval Forces Central port in Lapu-Lapu for the 6 a.m. fluvial procession that will bring them back to Cebu city.

After the sea procession, a reenactment of the first Mass, baptism, and wedding will be done at the basilica’s Pilgrim Center to be followed by the grand procession of the Sto. Niño image along the main streets of Cebu City in the afternoon.

Cebu Archbishop Jose Palma will preside over the 6 a.m. Pontifical Mass at the basilica on January 21, Sunday, the feast of the Sto. Niño. /with reports from Correspondents Benjie B. Talisic

Read Next
A night of food, music, dances in Cebu for 300 balikbayans