Kia breaks out of losing slump, beats Rain or Shine 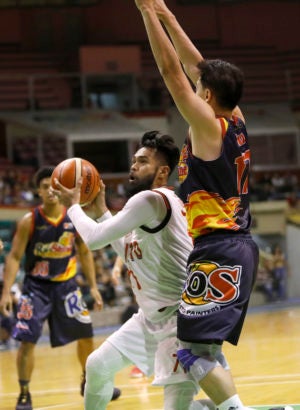 Ronald Tubid of Kia gets past the defense of Rain or Shine’s Chris Tiu.
pba images

KIA Picanto is rebuilding, only to find out that this rag-tag crew could do just fine.

Lumbering in obscurity and ridicule for the early part of the PBA Philippine Cup, the Picanto on Saturday night snapped a four-game skid in the tournament – and an eight-month losing streak – by bringing down Rain or Shine in a fight-marred contest, 98-94, at Cuneta Astrodome in Pasay.

“I am very happy for our team,” Ricky Dandan, thrust to the head coaching job after Chris Gavina resigned two weeks ago, said of his first win, which was tainted by a fight between Eric Camson and Rain or Shine’s Raymund Almazan late in the second quarter.

“This (win) will go a long way in our rebuilding of our ballclub,” said the former UP Maroon of the win, which the Picanto tasted last on May 21 last year under Gavina as the Picanto dropped the Elasto Painters below .500 at 2-3.

A day before, KIA management signed up Carlo Lastimosa from the free agent market after getting a release from NLEX and team consultant Joe Lipa, the former national coach, had hinted that they will still look to sign a big man and another scorer.

KIA came into the game losing its last three contests by an average of over 35 points, while the Elasto Painters had all sorts of momentum going their way after a 120-99 ripping of Phoenix Petroleum last Wednesday.

“I’m relieved,” Dandan said. “We really had no choice but to move forward and look at the positives of those blowouts. Our confidence was shot (during that losing streak).”

Fines are expected to be stiff for Camson and Almazan, though it was clear in replays that the KIA bruiser took the first shot by landing an elbow on the Gilas Pilipinas center’s head to trigger the commotion.

Punches were thrown but a bigger melee was averted as game officials and players from both teams tried pacifying Camson and Almazan.

Glenn Khobuntin hit some big shots at the crunch, while the Painters bungled several very makeable jumpers which could have turned things around inside the final minute.