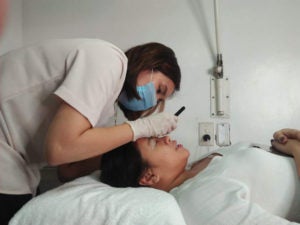 Trina Mikaela Go or Mikee is one of the few last experts who use Yumi, a French product being used by actresses and beauty queens.
AGNES ALPUERTO

Watching her mother and aunts dress up and apply their blush on and lipstick started her love affair with make-up and fashion.

And it is paying off because at 24, Trina Mikaela Go has started to create a name in Cebu’s beauty and cosmetics scene.

But Mikee, as she is fondly called, is not an ordinary makeup artist.

Trained abroad, she is one of the few professional permanent makeup artists in the city.

Her services include microblading for eyebrows and lash lifts.

“These are for people who do not want to spend too much time in front of the mirror but think ‘kilay (eyebrow) is life.’ So, I do their eyebrows and make it look as natural as possible,” Mikee explained.

For the lash enhancement, Mikee doesn’t use ordinary products.

Yumi is a single product compared to other lash treatments that use different products for each concern.

It is not a combination of different brands to achieve a perfect lift, tint and keratin treatment. Doing so may have many contradictions and be harmful for the lashes and the client.

“I am a Yumi Lash expert. After I trained with them last year, I am now certified to do the Yumi lashes to clients. There are only very few Yumi Lash users in Cebu,” said Mikee.

Mikee has always been “kikay” since she was a little girl as she enjoyed watching her mother and aunts put on their makeup and dress up.

This developed her fascination with makeup that she would doll up her three younger sisters and friends whenever they had events to attend to.

But Mikee is not also your usual fashionista.

She also has an entrepreneurial spirit.

When she was in the elementary, she would get scolded by the faculty for selling stuff to her classmates.

In high school, she and her friends sold cookies in Ayala Center Cebu, a mall inside Cebu Business Park.

She was in college when she started an online shop – Pink Lemon. She first sold accessories and later clothes. It clicked.

She didn’t only enjoy finding items to sell online at a cheaper price, she was also earning.

At that time, she wanted to be doctor –the reason why she took up medical technology, a pre-med course.

But her heart later led her to where fate wanted her to be –in business.

Shifting to and getting a degree in Business Administration major in marketing was a happy choice since this was where she was good at.

When the number of online retailers started to saturate the market, Mikee began looking for other ways to innovate even if her Pink Lemon was doing well and she had a pop up store in Urban Lifestyle at Axis Entertainment Ave, Vibo Place on Escario Street.

“I needed to evolve and find other means of income. I didn’t want to focus too much on one thing,” said the young entrepreneur.

Then she started to get interested in permanent makeup since it was the hottest trend in the market.

While she was good at it, Mikee was not then a professional makeup artist.

But there was a thirst inside her that needed to be quenched.

She started learning about permanent makeup from local sources but she felt that the skills she acquired were not enough.

Mikee then began researching about the House of Permanent Makeup, which conducts trainings on Yumi lashes abroad.

Some people advised her that getting into permanent makeup was not a good idea since she was not even a makeup artist.

But Mikee didn’t want to be just another makeup artist because anyone could learn how to put on makeup nowadays with all the detailed makeup tutorials online.

She also believed that the market for permanent makeup was expanding since women nowadays were always on the go and didn’t have time to perfect those eyebrows and lashes.

“So I took a leap of faith and did further studies abroad,” she said.

Mikee received different certificates from the House of PMU (Permanent Make Up) in Hong Kong for lashes, eyebrows, eyeliner, lips and even permanent concealer.

She also posted pictures of happy clients who were satisfied with her work.

Through word-of-mouth and referrals, her number of customers had gone up to at least 20 in a week.

Mikee admitted that people tend to shy away from permanent makeup when they find out it’s a tattoo and she has to cut through the skin.

They, however, change their mind when they realize that microblading looks more “natural” than the eyebrow tattoos of the 1990s which were too dark and heavily lined.

Mikee sees herself doing permanent makeup on a long term because her business is starting to become a hobby.

And there will always be a market for it because people are vain and consider looking good as a necessity.

But to be competitive, Mikee has to constantly innovate.

With this comes a plan to invest more in trainings so she could offer more services.

After all, cosmetic tattooing is a fast growing industry that is not limited to eyebrows but also includes face contouring such as shadowing of the face and microscalp pigmentation to cover up bald spots and stretch marks.

Her long term goal is to set up her own studio that functions as retail outlet not just for her products but other retailers as well.

In the meantime, she is based in the family-owned Le Beau Monde Salon along General Maxilom Avenue in Cebu City.