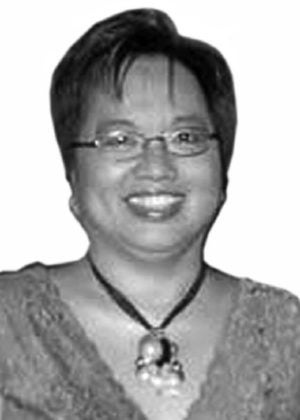 Killing time in a mall, I saw a group of young office-goers clumped together by the steps of an open-air plaza. They were all gazing upward, some holding up their cellphones, while others were pointing at something in the dark sky.

I joined them and spotted a small disc high up in the heavens. Then I remembered it was the evening the rare “super blue blood moon” would be visible from Earth. It was small, the details difficult to discern, but with some persistence, one could make out certain features. The color hovered between a mottled rust and orange, while on the edge one could trace a faint white line, a sign that the eclipse was about to come to an end.

And that, as they say, is how our evening drew to a close. Standing in the dark while a swirl of folks hovered around us. The cool breeze from Manila Bay blowing in. The faint colors of the “super blue blood moon” capturing our gaze. It was chilling to realize that the next time such a celestial phenomenon occurs, I would be 82, perhaps already too frail to attempt another sighting. How fragile life can be, like the fading hues of a rare moon sighting.

How proud I am as a Filipino woman to count as a sister in spirit a role model of courage and integrity, Ombudsman Conchita Carpio–Morales. Most recently, she issued a statement in which she refused to enforce the 90-day preventive suspension order issued by the President against Overall Deputy Ombudsman Arthur Carandang.

Morales cited a ruling by the Supreme Court issued in 2014 declaring unconstitutional a provision in the Ombudsman Law giving the President the power to discipline the Deputy Ombudsman.

Explaining her decision, Morales took potshots at Malacañang’s attempt to interfere in the affairs of her office.

Then she threw down a gauntlet to the President: “In a society founded on the rule of law, the arbitrary disregard of a clearly worded jurisprudence coupled with a confident stance that it will be changed should never be countenanced.”

Deputy Ombudsman Arthur Carandang was ordered suspended for what Malacañang called the “illegal disclosure” of bank details of the President and the first family. This was connected with his office’s investigation into the alleged ill-gotten wealth of the President.

While Morales has not indicated whether she will bring the matter to the Supreme Court or simply wait out the President’s wrath, observers say the high court could very well reverse its 2014 ruling if the issue is brought before it.

The ruling against the suspension of any Ombudsman officer by the President won by a very narrow margin, on a vote of 8-7.

The Office of the Ombudsman was established by the framers of the 1987 Constitution to serve as an independent office to investigate and prosecute any government official (with the exception of the President, Vice President, the Supreme Court justices, and heads of constitutionally protected bodies) who has been charged with major crimes. The Sandiganbayan hears these cases and hands down verdicts.

One can easily understand the need to keep the Ombudsman and his/her deputies independent from the rest of officialdom. After all, it would immediately lose its independence if any official, even an official higher in status and authority, is free to interfere with it.

It’s a very “iffy” proposition should Morales choose to go down this road. Given the bizarre behavior of justices today, its 2014 ruling could very well be reversed.

Still, we must admire Ombudsman Conchita Carpio–Morales for standing her ground. It would have been so easy for her to simply fold and walk away from the entire sleazy scenario. But, being a woman of substance, she knows she must defend the ramparts when these are coming under siege.