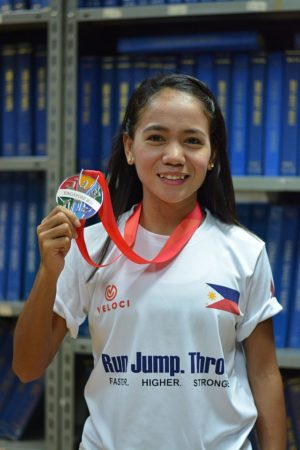 Cebuana running phenom Mary Joy Tabal ends more than two months of a self-imposed hiatus from racing when she laces up her running shoes today to compete in the 21-kilometer event of the 7-Eleven Run 2018 starting at the Cebu Business Park.

Her five-peat victory was like a scene straight from a dramatic movie because she crossed the finish line in tears. Her father Rolando passed away less than 24 hours from gun start.

The petite marathoner, who is the first Filipina to compete in Olympic marathon, is installed the prohibitive favorite today.

“It’s actually a last minute decision to join this race,” Tabal told Cebu Daily News. “For me, this is just part of my training and a way to test my fitness after a long rest. After the Milo Marathon, I took a month-long rest. This is also my way to overcome that tragic event last December when Papa passed away.”

Tabal squeezed in the 7-Eleven Run 2018 to her hectic schedule. She is busy processing her visa to be able to return to Tuscany, Italy where she trains. She revealed that she might be joining the Jinju Marathon in Korea which was part of her prize for topping the Milo Marathon Grand Finals.