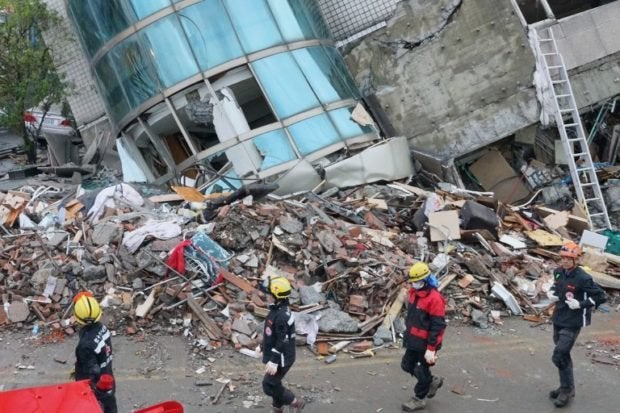 Rescuers walk past a collapsed building in Hualien on February 8, 2018 after the city was hit by a 6.4-magnitude quake late on February 6. /AFP

Taiwanese rescuers braved powerful aftershocks to search for survivors in a dangerously leaning apartment block that was partially toppled by a quake, locating two more bodies early Thursday to bring the death toll to nine as dozens remain missing.

A 6.4-magnitude quake hit the popular eastern tourist city of Hualien late Tuesday, leaving a handful of buildings badly damaged — some of them leaning at terrifying angles — as well as roads torn up and hundreds sheltering in local schools and a stadium.

The major focus for emergency responders remained the Yun Tsui apartment block where the majority of the deaths occurred and where dozens are still missing.

The lower floors of the 12-storey tower — which also housed a hotel — pancaked, leaving the structure leaning at a fifty-degree angle and sparking fears of an imminent collapse.

Despite those risks rescuers kept going into the building throughout Wednesday night and Thursday morning in a desperate search for survivors.

Strong aftershocks coursed through the ground sending rescue teams running from the building, only for them to return a little while later and resume their grim task.

One aftershock shortly before midnight on Thursday measured 5.7-magnitude.

“We discovered the body of a Chinese woman at the hotel in the Yun Tsui (building) earlier this morning and located another person who’s a hotel staffer,” he said.

In a updated toll, the national fire agency said nine people had now been confirmed killed in the quake including three Chinese mainland nationals.

The three mainland victims were all believed to be staying at the Beauty Stay Hotel, which was located on the second floor of the apartment block.

At least 62 people remain unaccounted for across the city. In the apartment block, 37 people are missing from flats alongside 10 hotel guests. More than 250 people were injured in the tremor, the strongest to hit Hualien in decades.

Hualien is one of Taiwan’s most popular tourist hubs as it lies on the picturesque east coast rail line and near the popular Taroko Gorge.

But the mountains that rise up behind the city — and bestow Taiwan’s east coast with such majestic beauty — are a testament to the deadly tectonic fault lines that run through the island.

Local broadcaster SET TV ran an interview with a man who said he was the husband of one of the Chinese mainland victims. /AFP

Read Next
Guidelines for candidates