Truck falls on its side; two dead, nine injured 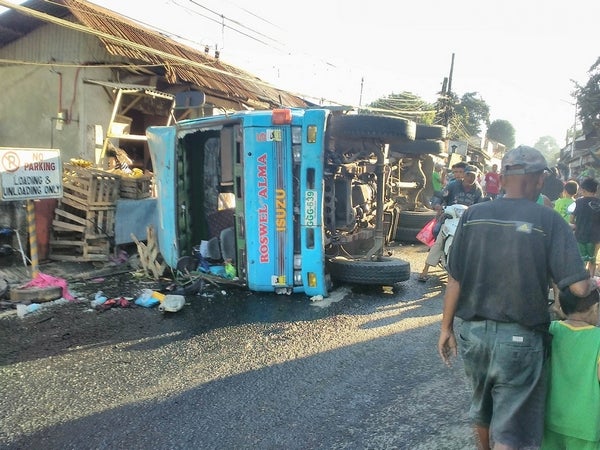 Two women were killed in the accident in Toledo City involving this truck loaded with vegetables.

A truck loaded with vegetables that lost its brakes as it negotiated a curved downhill portion of a barangay road in Toledo City, fell on its side, killing two of its passengers and injuring nine others.

Coyacot said investigation showed that the truck with plate number GGG 639 driven by its owner Roswell Sombilon, 34, of Barangay Sta. Cruz, Balamban town, came from the Carbon Public Market in Cebu City where they bought the vegetables, which would be supplied to the markets in Toledo City and Balamban in western Cebu.

As Sombilon was negotiating a curved downhill portion of a road in Barangay Don Andres Soriano in Toledo City at 2 a.m., he lost control of the heavily loaded truck after it lost its brakes and fell on its side.

The injured were brought to the Carmen Copper Corp. Hospital. They were then transferred to a hospital in Cebu City.

Sombilon was detained at the Toledo Police Station. /With Correspondent Benjie B. Talisic