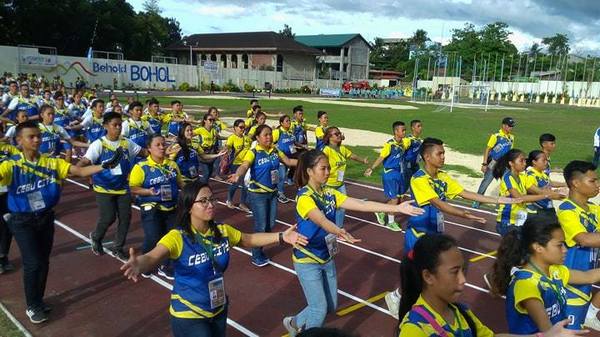 Two years after in October of 2013, the province was hit by a 7.2-magnitude earthquake that left it at ruins.

But the Boholanos have risen since then, and they showed it in yesterday’s opening ceremonies of this year’s Cviraa meet at the Carlos P. Garcia Sports Complex here, where the province rolled its red carpet for the 8,000-plus delegates from 19 divisions of Central Visayas that will be competing in the next five days.

“We were harassed by a natural disaster in 2013 and it was way difficult for us to get back on our feet. But what you see in Bohol now is a testament that we rise up from that disaster stronger and more united,” said Bohol Governor Edgar Chatto. “Bohol and Tagbilaran City are back and now we are ready to host the Cviraa meet again. We will also host the National Prisaa finals on April. We have to grab this opportunity [and show that] we are capable of hosting major sports competitions.”

And not only is Bohol proud about its ability to rise up from a calamity, it is also confident that a an athlete from the region can one day compete for the country.

“I feel optimistic that one of these athletes who are here may be our next Olympian and our next sports hero. That is why our city will do its best to provide a very good hosting for the next five days,” said Tagbilaran City Mayor John Geesnel “Baba” Yap.

Benedict Kyle Soronio was the first gole medalist for Cebu City. The other gold medalists were Mark Angelo Servila and Iverson Randall Dela Pisa, who topped the vault and all around events in boys’ elementary artistic gymnastics competition. All three gymnasts are from the University of the Visayas (UV).