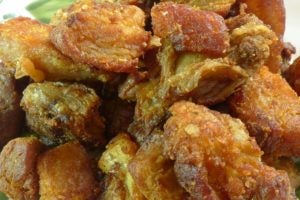 THE ADOBO is a Spanish/Portuguese way of cooking meat, that is marinated in vinegar, salt and spices. Naturally, this became popular in countries colonized by Spain.

However, the Spaniards soon found out that we have been cooking this dish even before they arrived on our shores.

In Spain, Adobo is the marinade or the way of cooking the dish. But in the Philippines, Adobo became the name of the dish itself.

In Luzon, the Adobo is made by marinating the meat in vinegar, soy sauce, salt, garlic and pepper.

The meat is boiled in the marinade, and when tender, the liquid is drained from the meat and is set aside. It is then fried until brown and the marinade is poured back into the fried meat.

I think some food writers say that Humba is the Cebuano Adobo because it almost looks like the Tagalog Adobo with sauce.

But Humba is an entirely different dish.

We got it from the Chinese.

The chunks of pork or pork leg are braised slowly until tender —or what Cebuanos call “humba nga nagkurog-kurog” (to mean that the fat and meat are so tender, they look like quivering gelatin on a plate).

What Cebuanos call Adobo is meat marinated in vinegar, salt and pepper. 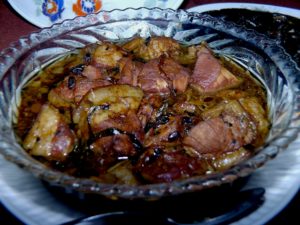 Note that there is no soy sauce. The meat is boiled in this marinade until it is tender or the marinade has been absorbed totally by the meat. Oil is added and the meat is deep fried on slow fire until caramelized. Caramelization causes the meat to have a golden brown color.

The Cebuano Adobo is also called Adobong Pina-uga (dry Adobo). Served on a platter, the meat has a golden brown sheen and is redolent of the
garlic-infused marinade it had been braised in for at least an hour.

This dish calls for a plateful of corn grits or rice, with coconut vinegar on the side.

I remember my Lola Lilang’s stories about life during World War II.

She told us that my Lolo Otik would have a whole pig butchered now and then. Most of the meat will have to be cooked the Adobo way and it is stored in big biscuit cans with the lard it was fried in.

At a time without refrigeration, this was their way of preserving meat.

I always think of my dear friend Hermenia “Minnie” Dosdos who said that as a child during the war, it was her assignment to save the small pot of Adobo whenever they have to run when the Japanese are nearby.

The Adobo is ingrained in the Cebuanos‘ collective memory of survival during this dark time.