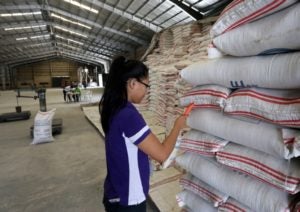 An employee of the National Food Authority inspects sacks of NFA rice at one of their warehouses at the pier area. CDN Photo/Junjie Mendoza

As the National Food Authority (NFA) prepares to resume its distribution of rice to Cebu next Monday, it advised consumers to include camote (sweet potato) and corn in their diet.

Du said Cebu is among the lowest in the provinces in terms of rice sufficiency level in Central Visayas at only 2.3 percent.

Bohol province, considered as the “rice bowl” of the region, has a 93.3 percent rice sufficiency level.

He said Cebu is more dependent on provinces such as Iloilo for rice.

For now, DA-7 Information Officer Melquiades Ibarra said including camote, corn and brown rice in the diet can help offset the demand for rice among Cebu-based consumers.

“NFA rice is intended for calamity victims but due to market demand we will resume distribution,” she said.

“After that, hopefully we can buy from the farmers this harvest season (this month),” Navarro said.

She said the Grain Retailers Confederation (GRECON) in Cebu will meet today to prioritize areas for the distribution of NFA rice.

Navarro said they distributed NFA rice in the provinces of Bohol, Siquijor and Negros last Tuesday. “Medyo nahuli lang dito kasi malaki ang Cebu (Cebu was a little bit late since it is big),” she said.

The NFA-7 stopped distributing NFA rice to retailers in Central Visayas since Feb. 1 due to reduced stocks after last year’s lean harvest. The NFA requested for the importation of 250,000 metric tons of rice which is expected to arrive in June.

“NFA is not here to compete. That is why we recommended for the importation,” Navarro said.

Du said they expect 105,000 metric tons of rice to be produced in the region on the first quarter of this year.

Read Next
Council to map traffic plans with LGUs