Biggest cosplay ever in Cebu 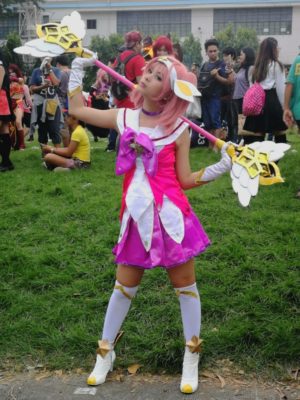 A cosplayer dressed up as Sakura Kinomoto from the hit anime Cardcaptor Sakura.(CDN PHOTO/MOREXETTE MARIE ERRAM)

At high noon last February 24, the grounds of Ayala Center Cebu seemed like a set from an alternate universe; where taking selfies with the Grim Reaper did not mean death, and the presence of the Plague Doctor did not bring a wave of deadly disease.

It was that time of year when characters from Japanese anime, Hollywood movies, superhero comics, and even “oppas” (a term used by a Korean girl to call a man who is older than her) from our favorite K-dramas come to life.

Over 5,000 people flocked to the Ayala grounds, located at the Cebu Business Park, to celebrate the 10th year of Otakufest, Cebu’s biggest cosplay and hobby convention.

Otakufest is derived from the Japanese word “otaku” which is used to describe anime and video game fans.

For the first time, the organizers decided to bring the event outside its birthplace, the University of the Philippines Cebu (UP Cebu) in what was to become the largest gathering of fans and cosplayers recorded in Otakufest history.

Founded by UP Cebu students, Otakufest started as a simple, fund-raising project to subsidize the construction of a promenade in 2007.

Sonia Margarette Vidal, chief director of Otakufest 2018, said that with the growing number of fans, contestants and convention-goers (con-goers), they opted to look for a place that could accommodate bigger crowds.

“We find that the space (in UP Cebu) is constraining, considering that the crowd is growing. And we finally had Otakufest registered as a legitimate entity, so it’s about time we expand,” said Vidal.

Unlike in previous years, Otakufest 2018 had no specific theme as a way to promote inclusivity and it welcomed fandoms inspired by other Asian cultures and Hollywood.

Thus, it came as no surprise for fans to see cosplayers garbed in costumes that were considerably poles apart — from favorite Filipino folklore creature tikbalang (half-horse; half-man humanoid), to a Russian sniper from World War II; from Japanese school-girls in their sailor-fuku dresses, to the masked, axe-wielding characters of the infamous thriller, “The Purge.”

Cosplaying the river-god Haku of Hayao Miyazaki’s Oscar-winning animated film, Spirited Away, was this year’s choice for 20-year-old Lovely Raquel.
Raquel, a civil engineering student from the University of Cebu (UC) always loves to dress up for Otakufest.

“I’ve been cosplaying for Otakufest. It’s that one time in our lives that we can dress up in our favorite characters and meet people who share the same interests as yours. And it’s really inspiring,” said Raquel who came dressed with a sea-green wig and traditional Japanese slippers.

She chose to cosplay as Haku because of her love for films animated and directed by Miyazaki.

For Maureen Gimenea, an English as a Second-Language (ESL) instructor, Otakufest 2018 was her second time to witness hobbyists and con-goers mingle with each other.

“Although it took me quite some time to familiarize the place since it’s not in UP anymore, the crowd, the guests, and the attractions are greater than the previous year, “ Gimenea said.

Otakufest 2018 was not only about cosplay competitions and seeing famous characters come to life, but it was all around fun for guests who were exposed to other aspects of Japanese culture such as its street food okonomiyaki and traditionally-cooked yakisoba.

Free sessions on learning the Japanese language were also offered; while a ramen-eating contest amused the crowd.

The event was also graced by Bless4, a U.S.-based Japanese vocal ensemble, and internationally-renowned cosplayers Yuegene Fay and Eki Holic.
Other segments included an Asian Pop Dance Competition with contestants dancing to a mix of Asian pop songs like Karencitta’s Cebuana to K-pop’s Twice’s Likey.

Other popular attractions were the Artist Alley — a display by more than 30 local artists showcasing their talents and masterpieces; and an exhibit featuring the world of Lego and vintage dollhouses.

“The fun and excitement are still there,” said second-timer Gimenea who, like many others, may again find herself watching next year’s Otakufest for more.