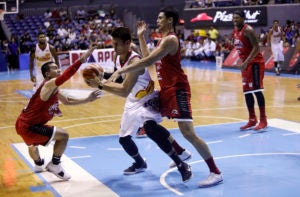 Rain or Shine’s Raymund Almazan is double teamed by Ginebra San Miguel’s Japeth Aguilar and LA Tenorio in their quarterfinal game at the Araneta Coliseum.

Barangay Ginebra held off Rain or Shine, 99-91, to arrange a semifinals showdown with defending champion San Miguel Beer in the 2018 PBA Philippine Cup Wednesday at the Smart Araneta Coliseum.

Japeth Aguilar came up big on both ends, posting 27 points, 12 rebounds, three steals and three blocks for the Gin Kings, who swept the Elasto Painters in their best-of-three quarterfinals series, 2-0.

They next face the top-seeded San Miguel Beer squad that advanced to the semis after beating the TNT KaTropa, 106-93, on Tuesday night.
Ginebra head coach Tim Cone was glad the series didn’t get to a decisive game three.

“What a relief,” he said. “It’s always a big relief to get through the quarters. To me, the quarters series is the hardest series to win just because there’s so much pressure on you to make the semis all the time.”

Fortunately for the multi-titled mentor Cone, he has the players to rely on when the going gets tough.

With Rain or Shine still in the thick of the fight midway through the final frame, Ginebra drew crucial plays from the likes of Sol Mercado, Joe Devance and Aguilar.

It was Aguilar, though, who hit the biggest shot of the game, sinking a short baseline jumper that extended the Kings’ lead to seven, 96-89, with 55.3 seconds left.

Maverick Ahanmisi scored a team-high 18 for the Painters while Raymond Almazan added 14 points and 13 rebounds.