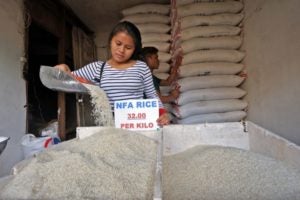 The Bigasan sa Palengke owned by Erwin Gok-ong, which sells NFA rice, has experienced slow sales. Gok-ong claimed that the low quality of this batch of supply of NFA rice was one of the reasons for this.
CDN PHOTO/JUNJIE MENDOZA

Despite the complaints of some retailers about the poor quality of the latest supply of National Food Authority (NFA) rice, the Department of Health in Central Visayas (DOH-7) assured that the rice is still fit for consumption.

DOH-7 Director Jaime Bernadas said the rice is fit for consumption because the NFA-7 allowed its distribution to the market.

“Kon wala pa siya madaot ug gi clear pa sa NFA na fit for consumption, busa ila pa gibaligya. Wala gyod nay problema. Ila na na call, in cooperation with other agencies, nga mo clear sa bugas for human consumption (If the rice is not spoiled and the NFA has declared it fit for consumption, then that is enough reason for the agency to sell it. We have no problem with that. It is also the NFA’s call, in cooperation with other agencies, to declare the rice fit for human consumption),” Bernadas told Cebu Daily News in a text message.

Erwin Gok-ong, president of the Grain Retailers Confederation of the Philippines (GreCon) Cebu City North District, has described this batch of supply of NFA rice as a well milled rice with 15 percent broken rice and is sold at P32 a kilo.

Gok-ong said it is also a bit darker than the ordinary rice and yellowish in color.

He claimed that this has caused their NFA rice business to slow down despite the return of the NFA rice in the market.

“Bati kaayo ang bugas sa NFA nga ilang girelease sa amoa (The NFA rice they released to us was of poor quality),” he said in the previous interview.
As of yesterday (Saturday), only 18 bags of the 100 bags that he purchased from NFA-7 since Tuesday, were sold out.

He said that sales had slowed down as compared before when they could dispose at least 50 bags of NFA rice a day in their Bigasan sa Palengke (BSP) at the Carbon Public Market.

While Edde Ramos, a rice retailer and member of GreCon, said some of his NFA rice stock he purchased are still in good shape.

“Naa say uban arang-arang, depende lang sa maablihan. Medyo low quality lang siya. Pero kay mahal man ang bugas, naa pa gihapon mopalit og NFA (There are some that are of good quality, depending on the bags we open. But most (of the NFA rice) are of low quality. Despite this, because the commercial rice is expensive, people will still buy this batch of NFA rice),” said Ramos, who owns a commercial rice store.

He said that his store had been selling NFA rice for 24 hours since Thursday because it was difficult to inform consumers that the NFA rice is back in the market.

“Ang NFA nabalik na sa merkado. Ato gyod ni ipagawas mintras naa pa (The NFA rice has returned in the market. We are selling this while it is still available),” he said.

He said that of the 50 bags of NFA rice he purchased only 20 bags are left owing to the huge bulk of customers in the evening and early morning.

Despite of the low sales of NFA rice in the past few days, Gok-ong said he would still purchase for NFA rice next week to cater the demand of consumers who need a cheaper rice alternative.

“At least, naa ra bugas ready kon naay mangita (there will be rice available for those who needed it),” he said.

Read Next
Man nabbed for rape of woman with disability