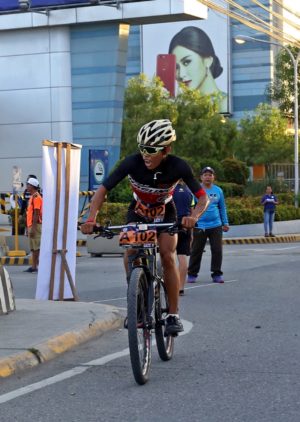 Jimboy Butad in action in the bike leg of the Consolacion MTB Duathlon. CDN PHOTO/LITO TECSON

CEBUANOS Lucille Ruiz successfully defended her title while elite newcomer Jimboy Butad made a name for himself in the men’s elite competition of the Consolacion Mountain Bike Duathlon 2.0 held yesterday in Consolacion town, northern Cebu.

Ruiz, a 41-year-old member of the Keith DeFiebre cycling team, clocked two hours, 25 minutes, and 22.29 seconds to earn back to back titles in the women’s elite category.

Both Ruiz and Butad will compete in the Tayud Duathlon on April 15 as the former will defend her women’s title and the latter looking to win the title in the 29-Under age-group. Butad will also be competing in the San Francisco Camotes Cross-Country Mountain Bike Challenge next week.