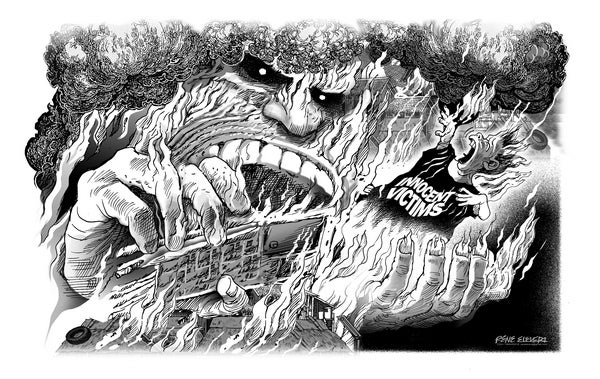 We note once again the sadness of the irony that more fires break out in Cebu in the fire prevention month of March than at any other time of year.

We can only convey our sympathies to Cañedo, who will have to inter her children, a task that in the natural order of things parents should not have to do.

Junard Chan, the chairman of Barangay Pajo, has called on the public to help nearly 2,000 residents in the wake of the blaze.

We trust that with the generous and philanthropic hearts of Cebuanos and others, the chairman’s appeal was not made made in vain. The survivors need food and water, beddings and toiletries and building materials.

At the same time, we hope that additional funds, not only from the barangay but also from the Lapu-Lapu City and national governments will be released to enable the Pajo residents to recover from their losses.

While acknowledging that the residents sat on contested land, the barangay chairman said the residents will be allowed to rebuild on the same site on the condition of reblocking to arrange future houses.

Governments, however, must not wait for the next major blaze before implementing the reblocking of densely populated areas to make them more accessible to firemen and less susceptible to the quick spread of fires.

Children, meanwhile, should never be allowed to handle matches and similar open flame implements, especially in the absence of supervising adults.

As this paper reported quoting fire authorities, “electrical misuse, faulty electrical wiring, and unattended open flame like lighted candles are among the top causes of fire in previous years.”

The fire that broke out in Barangay Pasil in Cebu City earlier this year, also a result of juvenile play with matches turned deadly should have been a cautionary tale to prevent similar tragedies.

Adults should keep matches out of children’s reach. This way they would be teaching their children to take care of lives, first of all their own.