Nesting place for leaders to soar 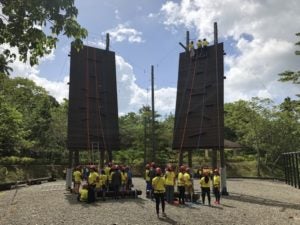 “The Flight” designed by renowned designer Kenneth Cobonpue is one of the iconic structures on the 10-hectare adventure camp in Balamban town in midwest Cebu.
CDN PHOTO/JOSE SANTINO S. BUNACHITA

There’s a place in Cebu where youths and professionals can enhance competency and leadership in a more active and challenging way.

Nestled in the hinterlands of Barangay Cansomoroy in the midwest town of Balamban, the Kool Adventure Camp (KAC) is the first and only fully dedicated adventure center in the Philippines.

“Our mission is to equip organizations and individuals with the character, competence, and citizenship to be leaders of change through powerful learning experiences,” said lawyer James Abadia, vice president for social development of the Ramon Aboitiz Foundation Inc. (RAFI).
The KAC is the flagship program of RAFI under its leadership and citizenship focus area.

It is a 10-hectare property along KM 42 of the Transcentral Highway and is about an hour and a half drive from Cebu City.

In 2011, the P500 million KAC development broke ground on the 10-hectare property in Balamban, and the adventure center was operational in 2014.

The Balamban adventure center has come from its first center in Lapu-Lapu City where KAC started in 1999 — a smaller area with smaller programs.

The center has 33 challenge ropes course (CRC) elements in five different clusters. These clusters include the Challenge Hall which has nine indoor CRC elements; and “The Flight” which is an iconic structure designed by internationally-acclaimed designer Kenneth Cobonpue.

The Flight is the centerpiece of the KAC and also its tallest structure. It has three multi-level sculptures with each having wing-like extensions.

“This iconic structure symbolizes the mission of Kool Adventure Camp which is like a nesting place where our participants can prepare before they soar to new heights,” Daphne Dia, assistant director of KAC’s youth development programs, told representatives from the media during a one day tour on March 7 at the site.

Other facilities of the KAC include corporate cabins and youth bunks, a community dining hall, an administrative hall, two conference halls, and four learning rooms, as well as low initiative areas, and a reflection area.

It is also complete with a medical center that has a standby ambulance and is open 24 hours to respond to any emergencies. The entire facility is covered by closed-circuit television cameras.

The KAC can accommodate up to 300 participants per day. 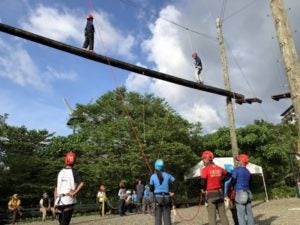 Instead of merely a leisure and adventure area, the KAC is a full course training program.

A full program involves a total of three days.

“We believe that leadership cannot be divulged in a classroom or office setting. It has to be experienced or simulated through powerful learning experiences,” Abadia said.

These experiences are best shown through KAC’s challenge ropes course which consists of an aesthetically designed series of ropes, cables, and wood poles combined in such a way as to simulate challenges that might be found in a natural setting. The CRCs test the participants’ mental, physical, and emotional risk taking and decision making.

These CRC programs give individuals the opportunity to practice their communication skills while becoming more resilient in overcoming their own limits and fears. For groups, it also helps them learn to be more interdependent and collaborative.

The facilitators of KAC are all trained in risk assessment and management; CRC safety standards as well as first aid response and basic life support.

In the Philippines, the KAC is the only associate member of the Association for Challenge Course Technology (ACCT), a trade organization serving challenge course professionals all over the world whose purpose is to promote the use of challenge courses and to set minimum standards for challenge course installation, operation and inspection.

The KAC is also an organizational member of the Association for Experiential Education which is based in the United States. With this, KAC staff are able to learn from experts in the field and benchmark with best practices from all over the world.

The KAC does not rent out its facilities for other events or programs as it is dedicated to its being an adventure education center.

Corporate and professional course fees start at P6,000 per person for a full three days and two nights program including full meals. Proceeds from these are also used to subsidize the youth programs.

Being originally built for the youth, the KAC only charges P600 per person as training fee for those from public high schools. For private high schools and youth organizations, different rates apply depending on the kind of program availed.

The late former RAFI President Roberto Aboitiz earlier said that the KAC is a major initiative for RAFI.

“There are other institutions in the Philippines involved in team building and adventure programs. Many do it for entertainment and leisure. RAFI KAC is a serious attempt to build leadership attributes in the Filipino youth,” Aboitiz used to say.