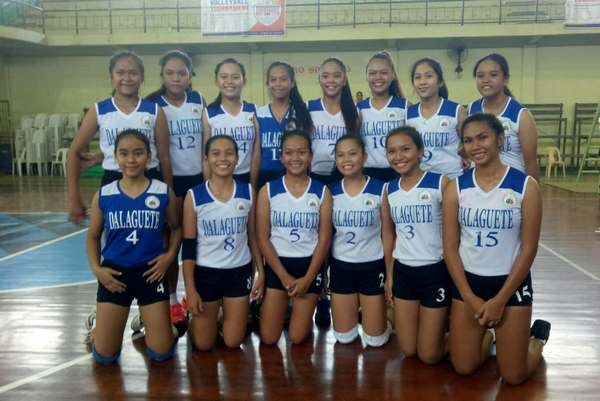 The Dalaguete volleyball team that is headed to the quarterfinal round of the 2018 Governor’s Cup Volleyball Tournament pose for a photo op after a win over Santander on Sunday. / Ray Charlie Diaz

Despite scoring a two-set win over Santander, Dalaguete’s head coach isn’t quite happy with the way his wards performed in their last elimination round game in the 2018 Governor’s Cup Volleyball Tournament yesterday at the Dalaguete Municipal Gym.

Dalaguete Head Coach Datus Alonso said his players were too distracted in their 25-21, 25-17 victory over Santander, a win that officially pushed the team to the quarterfinals of the tournament for volleybelles 18 years old and below.

“They committed too many errors,” Alonso told Cebu Daily News. “They were over driven by their urge to show off instead of focusing on the objective to win as a team.”

Due to the errors, Santander somehow managed to keep up with the home team Dalaguete in what was expected to be an easy win in the first set.

“They were too confident in the first set maybe because we are playing on our home court and most of the audience were on our side,” Alonso said.

Dalaguete was able to focus more in the second set led by the power services and spikes of Jascha Amatong. Rica Indig and Yaneiza Belandres teamed up on both ends of the floor to help Dalaguete chalk up the win and finish the bracket 2 standings of the South Division with an immaculate 3-0 (win-loss) record.

“Even though my team had some lapses, a win is a win. I am still glad [we won],” Alonso said.

Aside from Dalaguete, Oslob will also advance to the quarterfinals after finishing second in the second cluster of the South Division with a 2-1 record.