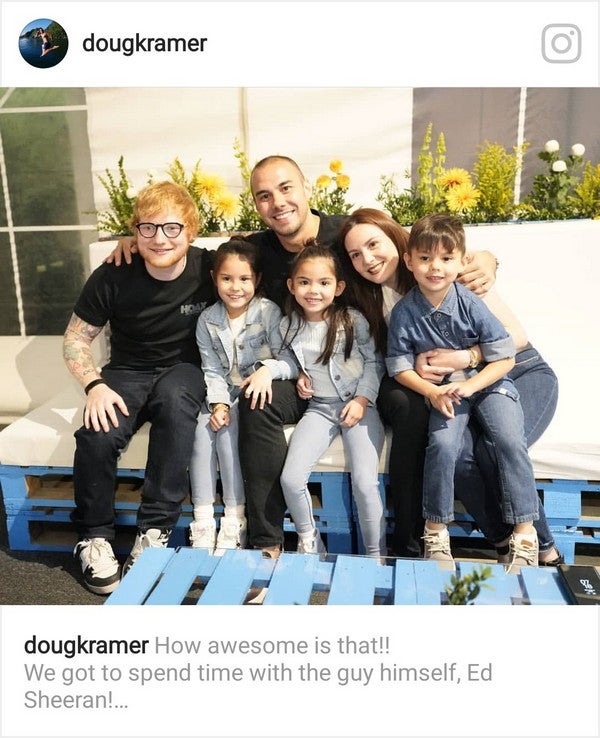 AWARD-winning British singer-songwriter Ed Sheeran had everyone under his spell during his visit here for a concert last Sunday.

And Filipino celebrities were no exception.

Among those who got lucky to meet him personally before his show was the Kramer family.

“Kendra gave Ed Sheeran an easy one for the last word for #TagalogTime,” the caption read.

Kendra was holding a white paper with the Tagalog word, “Nakakapagpabagabag.”

“How awesome is that!! We got to spend time with the guy himself, Ed Sheeran! This was right before his concert starts at MOA,” Doug captioned their family photo with Sheeran.

“It’s not everyday that you get to meet somebody you love listening to. Love your songs Ed Sheeran!! Soooo happy we got to meet you,” the actress said.

Another photo she shared of smiling Kendra and Scarlett with Sheeran.

“Lucky girls @kendraandscarlett get to sit beside Ed Sheeran!!! You two will always remember this day,” she said.

Also among the lucky fans were Jinkee Pacquiao, wife of Senator Manny Pacquiao who posted photos of her with the British superstar. She can also be seen handing Sheeran a pair of boxing gloves whose design is that of the Philippine flag.

“It’s an honor to meet you Ed Sheeran,” she captioned the photo.

On Twitter and Instagram, host Robi Domingo posted a selfie of him with Sheeran and captioned it: “I found a love … for me …” quoting one of the singer’s most popular songs, “Perfect.”

At Sheeran’s jampacked concert, celebrities were among the fans who partied and sang to his songs.

Present were celebrity couple Ryan Agoncillo and Judy Ann Santos together with their eldest child, Yohan.

Belo shared a video of Sheeran performing his hit song, “Thinking Out Loud.”

“Ed Sheeran is a musical genius. Can you imagine doing such an amazing concert all by himself. This is my favorite Ed Sheeran song,” she said.

Also spotted during the concert were the Barretto sisters Julia, Danni and Claudia together with actress Gabbi Garcia and actor Khalil Ramos.

Garcia uploaded a photo of Sheeran performing on stage and captioned it, “I CRIED.”

Also in the concert were Carla Abellana and Tom Rodriguez.

Young lovers Inah de Belen and Jhake Vargas also attended the concert with de Belen posting a photo of them together with the caption: “Thank you, my concert buddy.”

The concert was Sheeran’s second time in Manila. His first one was in 2015.

After last Sunday’s concert, Sheeran posted a photo of him with the concert crowd and captioned it with: “Manila!”