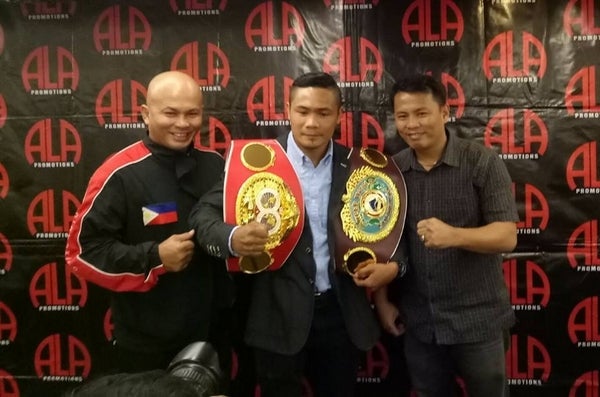 Three-division world champion Donnie “Ahas” Nietes is flanked by his trainers Edmund Villamor (left) and Edito Villamor during a press conference yesterday to announce that he is moving to the super flyweight division.
RAY CHARLIE DIAZ

The Philippines longest reigning boxing world champion Donnie “Ahas” Nietes has finally confirmed his move of going up to the Super Flyweight division to fulfil his dream of becoming a four-division world champion.

“Today, I have made my decision to move up to 115-pounds and vacate my IBF Flyweight world title,” Nietes said during the press conference yesterday at the St. Mark Hotel in Camputhaw, Cebu City. “To go up in weight is never easy but this is my dream, to become a four-division world champion.”

The move leaves the International Boxing Federation (IBF) World Flyweight title vacant and up for grabs.

It also left ALA Boxing Gym with no more world champions and the Philippines with only one remaining world champion in IBF super flyweight champion Jerwin “Pretty Boy” Ancajas.

Nietes, who has 41 wins, 1 loss, 4 draws and 23KOs, recently defended the IBF World Flyweight title against Mexican boxer Juan Carlos Reveco last February 24 at the Forum, Inglewood in the United States. He won the bout via knockout on the sixth round.

“We are looking forward to making the biggest fights for Donnie in the next couple of years,” Aldeguer said.

Despite his age, Nietes assured all his fans that he will have no problem in fighting his way into becoming a four-time world division champion.
“Everything is doable as long as I can complete my pieces of training.”

According to Edmund Villamor, Nietes coach, one of the factors in his ward’s decision to move up is that his body weight has gone up. Nietes’ current weight is at 129 pounds.

He also has options of challenging the unbeaten WBO World Super Flyweight king Naoya Inuoe (15-0-0, 13KOs) of Japan but the latter is scheduled to move up to the Bantamweight division to challenge British WBO World Bantamweight champion Jamie McDonnell.

Another ideal opponent would be Ancajas (29-1-1, KOs), who is, however, set to defend his title against mandatory challenger Jonas Sultan, Nietes’ stablemate at the ALA Boxing Gym this May.

“I would most preferably choose Chocolatito to be my opponent. I always wanted to fight him ever since I was in the Flyweight division,” Nietes said. “I do not want to fight against my fellow Filipino (referring to Ancajas) unless we do not have any choice,” he added.