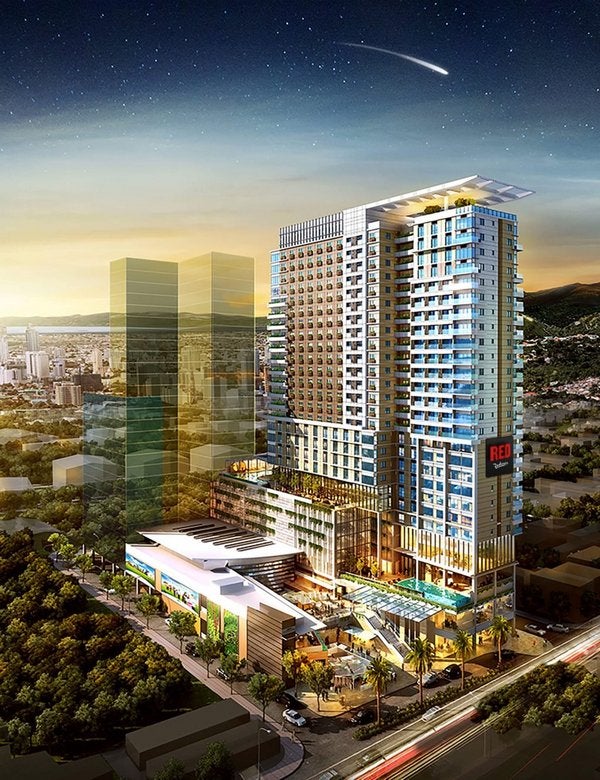 This is an artist’s rendition of the Astra Centre, a 1.2-hectare mixed-use development along A.S. Fortuna St. in Mandaue City, which will include a Radisson Red Hotel. CONTRIBUTED

Tourism has remained as one of Cebu’s major economic drivers over the past years, and it has no signs of slowing down anytime soon.

In order to capture the expected surge of tourists to Cebu, property management and research firm Colliers International Philippines is recommending for developers to foray into the hospitality sector.

“The construction of more hotel rooms shows that developers are responding to the anticipated surge in tourists given the completion of the new terminal at the Mactan Cebu airport,” Colliers Research Manager Joey Bondoc told Cebu Daily News.

Aside from the tourists, more international hotel brands are also expected to establish their footprint in the Philippines, especially in Cebu in the next few years, he added.

In fact, one such international hotel brand had recently announced its entry into Cebu, particularly in Mandaue City.

The Radisson Hotel Group has signed a management contract with homegrown developer Cebu Landmasters Inc. (CLI) last week to bring the first ever Radisson Red Hotel in the country to Cebu.

“Cebu Landmasters’ plan is in line with our recommendation to both national and local developers – complement integrated communities with hotels.

In a press conference earlier this week, CLI President and CEO Jose Soberano III said the Radisson Red Hotel would be the centerpiece of Astra Centre, their major mixed-use development along A.S. Fortuna St. in Mandaue City.

He said they were happy to partner with the Radisson Hotel Group in their efforts to serve the growing tourists coming to Cebu.

“Our company is positioning itself to be very active in the tourism and hospitality industries,” he said.

The Radisson RED Hotel will have 146 rooms. It is expected to boost CLI’s current portfolio to 756 rooms.

Soberano said their location in Mandaue City is aimed to make tourists more welcome in this corridor which connects Mactan Island and the MCIA (Mactan-Cebu International Airport) to Cebu City as well as the rest of the province.

Astra Centre is a 1.2-hectare property being developed by CLI in the area.

Aside from the hotel, it will have two business process outsourcing (BPO) towers, a residential condominium, a boutique mall and supermarket with a gross floor area of 10,000 square meters, and some corporate offices.

According to CLI Chief Operating Officer Jose Franco Soberano, they are still working on some documents for the hotel construction.

It is targeted to open by the fourth quarter of 2021 or earlier.

“We are about to completely secure the permits. We hope to break ground within the next two to three months. It will take three years to complete the building,” he said.

The younger Soberano said one of the main reasons they were attracted to partner with the Radisson Hotel Group was the “innovation” behind the Radisson Red brand which targets the millennial travelers as well as “tech-savvy” travelers.

Radisson Red will be the second brand of the Radisson Hotel Group to enter the Cebu market. Its first property is Radisson Blu in the North Reclamation Area.

Scott Bryce, Radisson Hotel Group vice president for finance and IT for Asia Pacific, said they are “very excited” to bring in Radisson Red to Cebu.

“Radisson Red is our newest brand. Launched in 2015, to take in the millennials and those with the ageless mindset because we don’t want to pin people into an age,” he said.

He said that a big part of the hotel’s operation would feature technological innovations such as digital check-in via the Radisson Red app, enabling guests to head straight to their room and unlock the door using their smartphone, bypassing reception.

It will also feature “bold designs” and the latest smart technology which will allow guests to stream content from their phone to their TV.
The hotel’s minimum room size is 28 square meters.

Scott, who represented the group in the signing, said their partnership is valid for 10 years.

But he said they are “very confident” in partnering with CLI and they intend to renew it later on.

Aside from the Philippines, other Radisson Red hotels in the Asia Pacific pipeline include Guangzhou in China, Kuala Lumpur in Malaysia, and Mohali in India.

In a statement, Radisson Hotel Group President for Asia Pacific Katerina Giannouka, said Cebu is the “perfect” location to introduce Radisson Red to the Philippines.

“This is a dynamic, fast-paced urban center with a youthful vibe and positive outlook, and we look forward to welcoming guests at Radisson Red and introduce a new era of hospitality to the country,” she said.