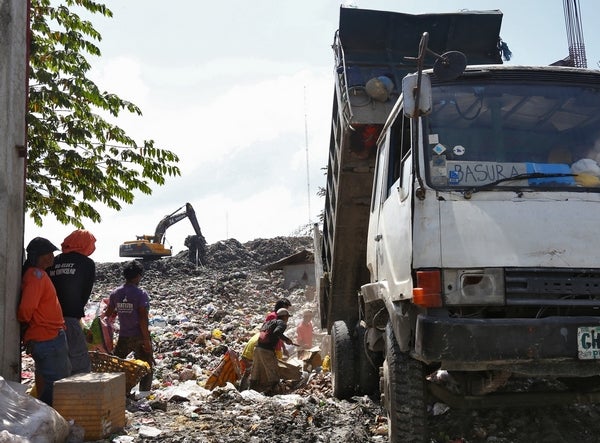 The Inayawan Landfill is closed and will be rehabilitated. The Supreme Court has affirmed the decision of the Court of Appeals granting a Writ of Kalikasan to the 15-hectare dump site. CDN FILE PHOTO

CEBU City Councilor Joel Garganera threatened to file administrative and criminal complaints against any official of the Cebu City Government, including Cebu City Mayor Tomas Osmeña, if they use the Inayawan landfill in Barangay Inayawan, Cebu City as a garbage dump.
“I would like to remind the mayor that he should comply with the order of the High Court. Non- compliance? There’s accountability there. He better do his job because he might be suspended for this and I will not be hesitant to file the necessary administrative and criminal complaints,” said Garganera.
The Supreme Court (SC) affirmed the decision of the appellate court granting a writ of kalikasan on the 15-hectare site to prevent the Cebu City Government from dumping garbage there and so that the dumpsite would be rehabilitated.
In an 11-page decision dated March 20, 2018, penned by Associate Justice Noel Tijam, said the continued operation of the Inayawan landfill “poses a serious and pressing danger” to the environment, and could result in “injurious consequences to the health and lives of nearby residents.”
All 13 other SC justices concurred with the decision, except for Chief Justice Ma. Lourdes Sereno, who is still on leave.
Garganera also urged the Environmental Bureau Management of the Department of Environment and Natural Resources in Central Visayas (EMB – 7) to monitor activities at the Inayawan landfill that will violate the SC decision.
The Inayawan landfill is closed and is the subject of an ongoing study by the Asian Development Bank (ADB) which the city government asked to formulate plans of putting up a waste-to-energy (WTE) plant.
Last January, the city government also secured approval from the Philippine Government Electronic Procurement System for the bidding of the closure-rehabilitation plan for the landfill, with a budget of P85 million.
Both the ADB study and the bidding for a rehabilitation plan are done in compliance with the order of the Court of Appeals (CA) to rehabilitate the Inayawan landfill.
Sought for comment, Osmeña said he will follow the orders of the SC but is unfazed by the threats coming from Garganera who is a member of the opposition Barug Team Rama Party.
“(Using) Inayawan is very expensive. We should not really use it as a landfill … but he (Garganera) will always file a case against me. So, what he says doesn’t mean sh*t to me. It’s all politics to them,” said Osmeña.
Osmeña appealed the ruling of the CA which issued the writ of kalikasan saying he did not want to go back to the private landfill in Consolacion town, which charged the city P700 per ton as tipping fee for the garbage collected. He also said the city had no binding contract with the facility. /with CNU Intern Maejane Dungog