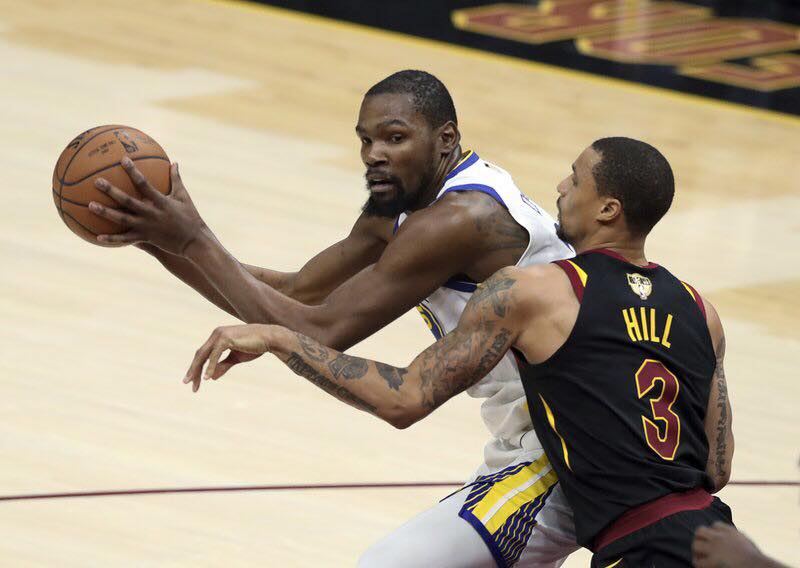 Kevin Durant of Golden State posts up against Cleveland’s George Hill in Game 3 of the NBA Finals in Cleveland. Ap photo

Despite a bad shooting night from Stephen Curry, Golden State still pulled off a 110-102 victory over the Cleveland Cavaliers in Game 3 to take a commanding 3–0 lead in the 2018 NBA Finals on Thursday morning, Philippine time at the Quicken Loans Arena in Cleveland.

Kevin Durant stepped up to score 43 points to make up for the 11-point performance of Curry as the defending champion Warriors are just a win away from sweeping the Cavaliers.

LeBron James scored 33 to lead the Cavs, who are in danger of losing to the Warriors for the second straight year and third time in four successive Finals appearances.

Although shooting poorly from beyond the arc the whole game, Curry managed to make a huge one in the final minutes of the fourth that paved the way for the victory.

James got a lot of help from Kevin Love (20) and Rodney Hood (15) but still couldn’t get over the offensive juggernaut of the Warriors.

Read Next
BOC seizes P2.5M worth of smuggled motorcycles, bicycles and excavator