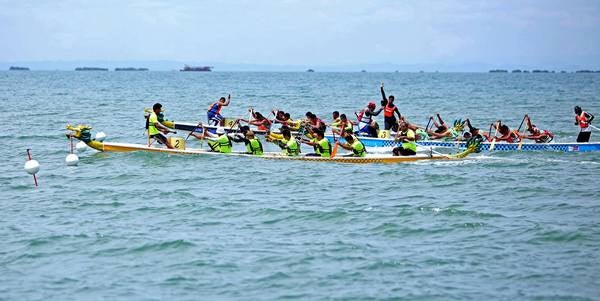 The Dumaguete Yellowfins team in action in the Cebu City Dragonboat Festival at the South Road Properties. CDN PHOTO/LITO TECSON

Following the success of the Cebu City Dragonboat Festival yesterday, Cebu City Councilor Jerry Guardo is confident that the city can host bigger competitions in the future.

Guardo, the chairman in Youth and Sports Development, said he received great feedback from the participants of the race held in the seas off the Il Corso, Citta de Mare at the South Road Properties (SRP).

“They told me they are more than satisfied of how the event turned out. Some of them would tell me that Cebu City has a world-class setting compared to other venues they have competed in,” Guardo said.

The Cebu City Government and the Cebu City Sports Commission (CCSC) teamed up with Fillinvest to host this dragonboat competition.

“Most paddlers said the place is really promising,” said George Calles, the Manager of the Marketing Department of Fillinvest Lifemalls. “In the long-run, we are hopeful that we can host international sporting events once this place will be fully developed.”

Meanwhile, two dragonboat teams from Dumaguete and one from Iligan City took home titles in the race.

Dumaguete’s Umagu emerged at the top of the 300-meter Women’s Category by clocking one minute and 33.61 seconds.

In the 300-meter Open category, the Dumaguete Yellowfins finished first with a time of 1:18.32.