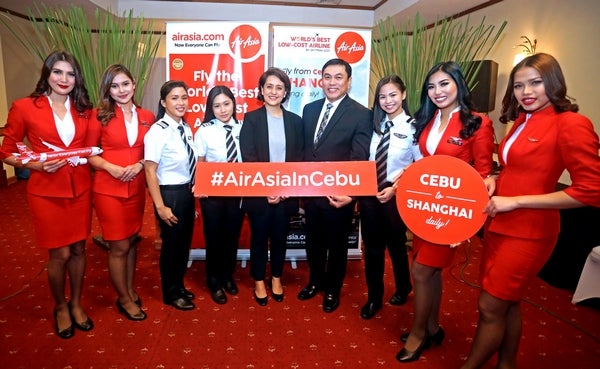 Cebu will be the center of plans for expansion for low-cost airline, AirAsia Philippines, especially with the opening of Mactan-Cebu International Airport (MCIA) Terminal 2 next month.

Captain Dexter Comendador, AirAsia Philippines CEO, said in an interview on Tuesday that they had seen the huge potential for growth of their Cebu hub with the opening of the P17.5-billion Terminal 2.

“We are delighted to be moving to a new terminal, which will provide our guests with enhanced travel experience. The relocation to the new terminal also provides us with great capacity for long-term growth and expansion in Cebu as AirAsia’s hub,” Comendador said.

Comendador and other executives of AirAsia were in Cebu on Tuesday to take part of the Innovation Summit, one of the highlight activities of the monthlong Cebu Business Month (CBM) 2018 celebration.

The Terminal 2, which will exclusively cater to all international flights to and from Cebu, will start commercial operations on July 1. It was inaugurated by President Rodrigo Duterte last June 7.

Cebu is becoming a major hub for airlines this year due to the new Terminal 2 which is expected to increase MCIA’s capacity thrice to 12.5 million passengers annually.

The six-month closure of the popular Boracay Island last April also prompted AirAsia and other airlines to increase their flight frequency to and from Cebu, as well as develop new domestic routes to and from Cebu, to divert tourists who were originally supposed to go to Boracay.

For AirAsia Philippines, they are also scheduled to open their first daily direct flights from Cebu to Shanghai, China, on July 7.

Last May 9, the low-cost airline also opened their first Cebu to Shenzhen flight which is once a day; while last May 18, they started their twice-a-week flights from Cebu to Hangzhou.

Comendador said AirAsia wanted to tap on the growing interest of Chinese tourists who want to visit the Philippines and Cebu.

In Central Visayas alone, records from the Department of Tourism (DOT) 7 showed that the number of Chinese tourists who visited the region increased by 75.28 percent last year, compared to 2016.

Omar was in Cebu as one of the speakers of the ongoing Innovation Summit at the Waterfront Cebu City Hotel and Casino. The event is part of the month-long celebration of the 2018 Cebu Business Month (CBM).

She said the AirAsia Group is looking into developing and expanding their network, especially in the Southeast Asian region as a whole.

With investments already poured in by the group in their existing destinations, Omar said it’s more practical for them to develop new linkages within these existing ones and to increase the utilization of their aircraft.

Last May, AirAsia also launched its Cebu to Clark route which is four times a week.

“Visayas and large parts of Mindanao are underserved markets that are saddled by high air fares due to limited options or duopoly. We are excited to introduce new flights from Cebu to VisMin and vice versa and make flying more affordable, accessible through our signature low fares,” Comendador said.

AirAsia Group is the leading and largest low-cost carrier in Asia and services the most extensive network with over 120 destinations.

AirAsia Philippines operates a fleet of 17 aircraft with domestic and international flights out of hubs in Manila, Cebu and Kalibo. The airline operates several flights to and from Manila, Davao, Cebu, Kalibo, Caticlan, Tacloban, Tagbilaran, Puerto Princesa, Clark and Iloilo in the Philippines.