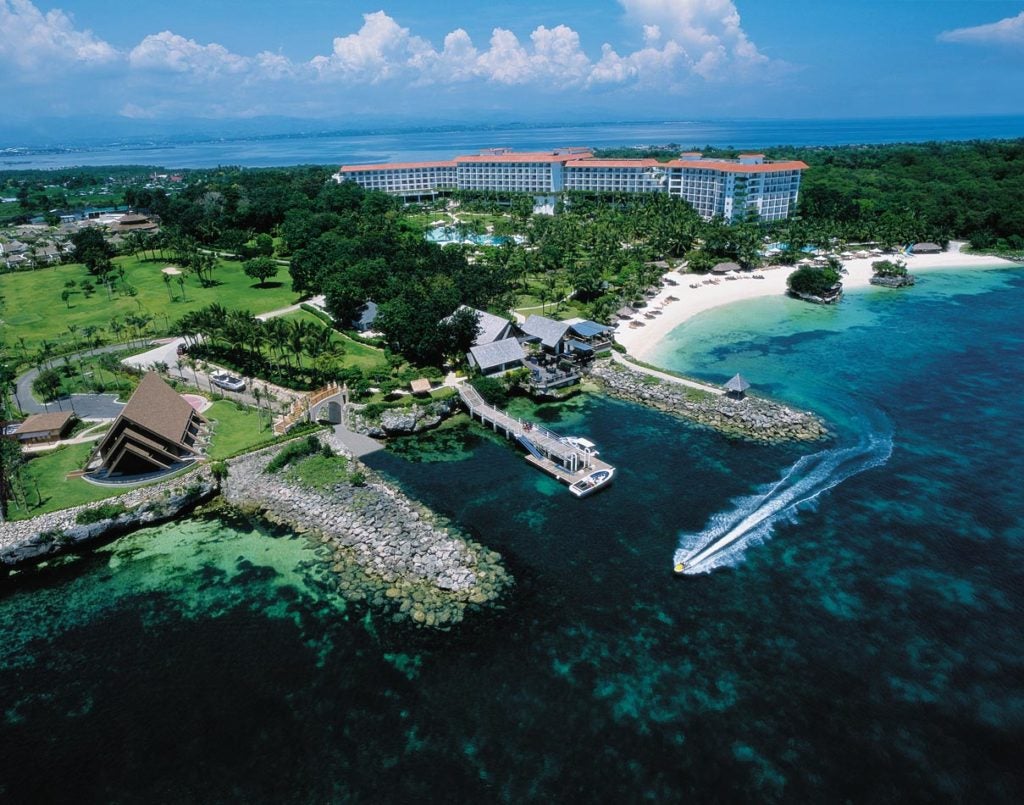 Shangri-La Mactan Resort and Spa (left photo) is one of the businesses in Cebu using renewable energy to power its facilities. Shangri-La has partnered with AboitizPower which provides the hotel with geothermal power from its plants in Albay. (photo below) Nature Spring’s plants are powered by rooftop solar panels providing the popular water brand firm with 3 megawatts of power.

Aside from bigger companies that aim to put up huge solar power plants to supply clean energy direct to the grid, there are also those that have entered the small-scale segment market of solar power.

In Cebu, big corporations and property developments that have huge rooftops ideal for the installation of solar panels are being wooed to invest in green technology.

With a 100-kilowatt (KW) installation on top of the Aboitiz and Co. (ACO) office in Cebu City, clean energy is now being supplied to tenants in the Aboitiz Group compound like ACO, AboitizPower, AboitizLand, and Pilmico, among others.

“We want to show customers our confidence in the technology and its capability by putting it on our own roof,” said APX General Manager Jose Rafael Mendoza as the company now looks into several other projects for Visayas and Luzon.

Through its Cleanergy portfolio, the company’s brand that houses its clean and renewable energy assets, AboitizPower and its partners generate 1,272 MW which is about 32% of AboitizPower’s total net sellable capacity.

The Retail Competition and Open Access (RCOA) scheme of the Department of Energy (DOE) allows companies to choose their own electricity suppliers.

For one, Cebu’s Shangri-La Mactan Resort and Spa has sourced 2.7 MW from AboitizPower’s Tiwi Geothermal Power Plant in Albay since April 2017.

“There are six environmental categories that Shangri-La, as a group, focuses on, including climate change mitigation,” said Irene Tan-Meca, Shangri-La Mactan’s CSR and sustainability service leader.

She said their efforts include lowering its energy consumption through energy-efficient technologies, banning CFCs (chlorofluorocarbons) in refrigerant and aerosol systems, and using alternative energy sources.

Shangri-La aims to reach a 20-percent reduction in energy and CO2 emissions intensity by 2020.

“Reliable power supply is very vital to our operations, as power interruptions have adverse effects on our operations and hamper our guest experience,” said Shangri-La Mactan’s director of engineering, Dayalan Swamidurai.

With RCOA, he said, the hotel has experienced reduced power outages and costs.

Like Shangri-La, more and more businesses are looking for sustainable energy solutions.

“More than just supplying power, we are looking at providing better solutions to our customers. Our wide portfolio of energy sources, both renewable and non-renewable, gives us the flexibility to meet the demand of our customers, while assuring our customers of the reliability,” said Aboitiz.

The facility was completed in the first quarter of 2018.

“SM Prime has always been committed to reduce greenhouse emissions and maximize energy efficiency in our malls. This is just one of the many renewable projects we have been doing and we will continue with finding ways on how to make our operations more environmentally sound and sustainable,” said SM Prime’s Hans Sy in a statement.

The SM malls have approximately 33,000 solar panels capable of producing 8.9 MW of electricity.

Another major structure in Cebu that has turned to rooftop solar power is the Mactan Cebu International Airport (MCIA).

About 6,000 photovoltaic (PV) modules were installed on the roof of the 17,500 square meter old MCIA terminal 1 building.

The solar power system is expected to harvest around 6,560 KW daily and can handle about 70 percent of the terminal’s total power requirement at peak hours.

GMCAC commissioned SolEnergy for the project which was completed in August 2017.

In a statement, GMCAC said this initiative signifies the company’s commitment to reduce their carbon footprint by using a renewable power source like solar.

GMCAC’s use of solar coupled with other sustainability efforts like the use of more than 4,000 LED (light emitting diode) lamps all throughout the terminal has resulted to projected monthly savings of P1.2 million in power consumption and a total carbon reduction of 3,200 tons per year. 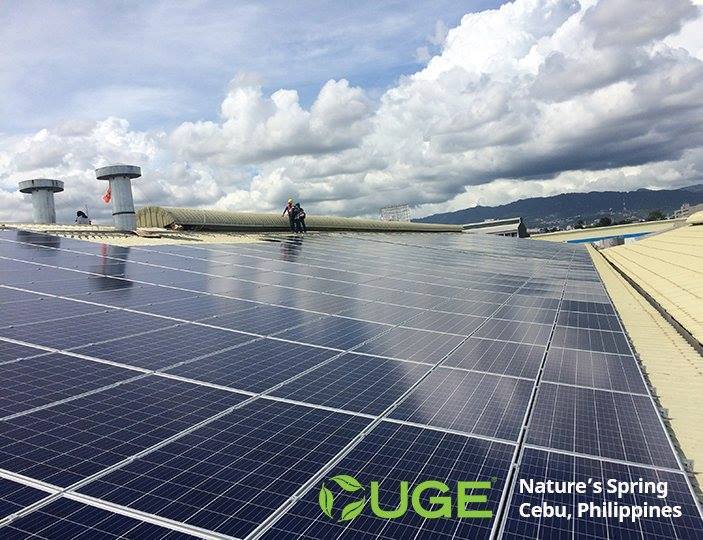 With the increasing demand for small-scale rooftop solar projects, more local and foreign companies, like UGE Philippines — whose headquarters are based in Cebu —are seriously looking into the island and the rest of the Philippines as a market.

UGE Philippines president Tyler Adkins described the Philippines as a good market for rooftop solar projects because of its “reliable sun”.

UGE International is a New-York based solar energy solutions provider and was established in 2008. Worldwide, the company accounts for the construction of 350 MW of solar power projects.

Among their biggest Philippine clients is Nature’s Spring, a successful drinking water brand, which uses around 3 MW of solar power for their different branches in the country.

In order to develop more solar rooftop projects in Cebu and the country in the next two years, UGE Philippines will invest around P500 million.

“Cebu is better than Manila. The number of hours that the sun shines is much more in Cebu. It is 5.5 hours a day on average, that considering typhoons and cloudy times already. In Manila, it’s one hour less,” said Cebuano Ramon Fernandez, a UGE Philippines director.

“You have to start thinking of your roof as an energy asset. It is something you could use to generate solar energy,” said Dante Briones, the chief operating officer of the company whose projects in Cebu are located in the cities of Mandaue, Lapu-Lapu and Carcar. (To be concluded)