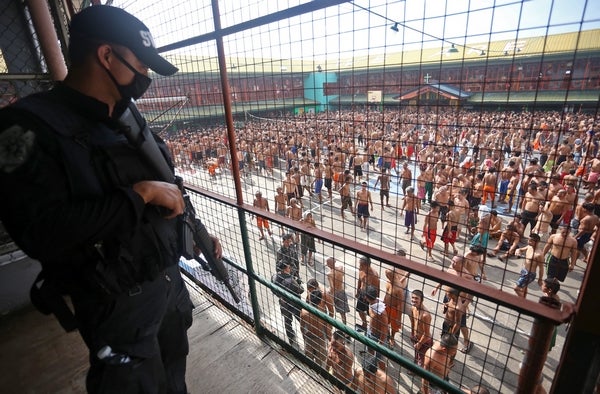 In this photo taken on Oct. 5, 2017, a SWAT personnel watches the Cebu Provincial Detention and Rehabilitation Center (CPDRC) inmates from a vantage point during a greyhound operation at the overcrowded jail facility. CDN file PHOTO

The management of the Cebu Provincial Detention and Rehabilitation Center (CPDRC) will temporarily stop accepting prisoners from municipal jails due to lack of space for new detainees.

Valmoria said he will inform Cebu Gov. Hilario Davide III about his plan before the CPDRC will stop accepting additional inmates.

Davide is out of the country on a vacation and will be back at the Capitol on July 3.

Once the CPDRC will stop accepting inmates, individuals arrested for crimes in the 51 towns and cities of Cebu will have to stay in temporary police detention cells in their respective localities while their cases are being heard in courts.

Most of the prisoners are facing drug-related charges in court.

To maximize the space for inmates, Valmoria said makeshift rooms inside CPDRC, known as “kubol-kubol,” were torn down.

Valmoria said at least 57 inmates at the provincial jail are set to be transferred to another facility in the northern Cebu town of Medellin, 120 kilometers from Cebu City, but it won’t still be enough to decongest CPDRC.

He said they were doing everything to address jail congestion and subsequently provide a humane facility for detainees who are not yet convicted of the charges filed against them.

High-profile inmates such as suspected drug lord Alvaro “Barok” Alvaro and former Bohol Provincial Board Member Niño Rey Boniel, who is facing charges in court for allegedly killing his wife, are presently detained in separate detention cells so it would be easy for jail officers to monitor them.

CPDRC was opened in 2004 during the term of then governor Gwendolyn Garcia who turned the old coral stone provincial jail along M.J. Cuenco Avenue in Cebu City into a museum.

The operation of CPDRC is managed by the Cebu provincial government, with the governor as the official jailer, providing funds for its operation and transportation of detainees when they are brought out to attend court hearings.

It is considered to be more than just a provincial jail, as CPDRC had gained international fame because of its dancing inmates, which happened after a 2007 YouTube video of the inmates dancing with intricate choreography to Michael Jackson’s “Beat It” went viral and spurred regular public
performances.