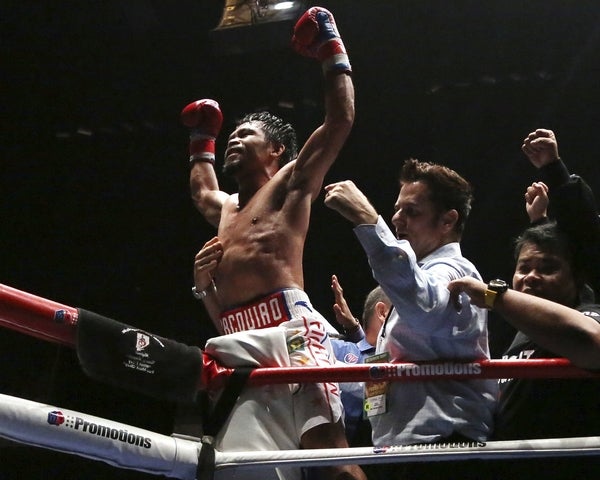 Kuala Lumpur, Malaysia — Nine years since his last knockout victory and coming from a bitter loss the last time he climbed the ring, not a few doubted if Manny Pacquiao could rekindle the magic that once electrified the boxing world.

Throw in another major adversity — the ‘Pambansang Kamao’ will be turning 40 at year’s end – and a major fight against a dynamite-fisted champion was a disaster waiting to happen.

But the boxing senator proved his critics wrong and effectivelysilenced the naysayers when he scored a scintillating seventh-round knockout over Argentinian Lucas “El Maquina” Matthysse in the main event of the Fight of Champions at the packed and nousy Axiata Arena in sunny Kuala Lumpur.

“Sinong may sabing matanda na ako. I feel like I’m 27 or 28,” boasted the ring icon who floored Matthysse three times to snatch the latter’s WBA welterweight belt in a fight watched by no less than Philippine President Rodrigo Duterte and Malaysian Prime Minister Mohammad Mahathir.
Pacquiao was in a jovial mood when he met the press in a post-fight presscon.

“Alam ko natakot si Lucas Matthysse sa power ko kaya hindi siya maka diskarte, kaya nag iba ang pag-fight niya (I know that Lucas Matthysee got scared by the power of my punches so he was not able to make his moves; that was why his fighting stance changed),“ he said to the delight of the spectators.

He then let out a one-liner, “Matanda na ba ako?” to which the audience hollered with a defeaning ’Noooooo.’

Pacquiao credited his return to fearsome form to a stringent and “focused” training camp under Boboy Fernandez, his childhood friend who is now his official trainer.

Pacquiao proved too fast and strong for Matthysse whom the Pambansang Kamao relegated to a gangling, confused and embarrassed fighter who just could not – no matter how hard he tried -to solve a mammoth puzzle like Pacquiao. 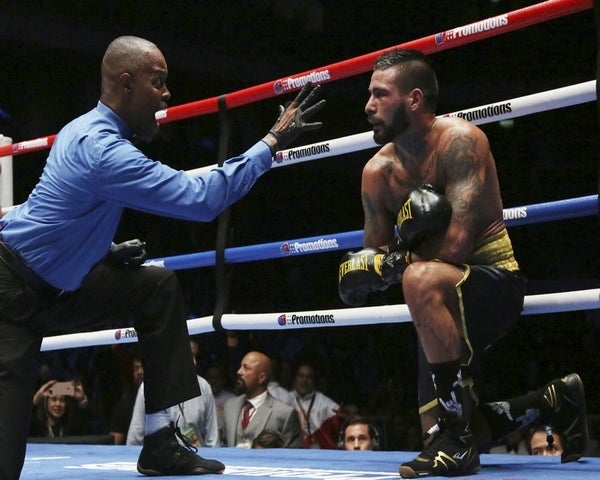 The referee checks Lucas Matthysse of Argentina after falling from a punch from Manny Pacquiao of the Philippines during their WBA World welterweight title bout in Kuala Lumpur, Malaysia, Sunday, July 15, 2018. Pacquiao won the WBA welterweight world title after knocking out Matthysse on round seven. (AP Photo)

Pacquiao had Matthysse all figured out in the first three minutes of the fight.

Pacquiao said he already sensed his punching power was too much for Matthysse as early as the opening round.

“I know he cannot handle my punches,”

Pacquiao said during the post-fight conference Sunday after he delivered a seventh-round knockout for the WBA welterweight crown.

“From the first round, I already felt that he was scared of my punches. I can see it in his eyes and actions.”

Pacquiao had Matthysse on his heels majority of the bout. A left uppercut knocked Matthysse down in the first round before a crisp jab by Pacquiao hurt him again, forcing him to take a knee before another left uppercut ended it for good.

Pacquiao took solid shots from the Argentinian fighter but was never in trouble throughout the fight.

“From the beginning of the first round I knew in my mind already that I can control the fight, but our strategy is to be patient take time don’t rush and don’t be careless just like before,” he said.

The 39-year-old Pacquiao showed no signs of rust despite coming off a one-year layoff since losing to Jeff Horn in Brisbane, Australia.

The eight-division champion earned his 60th win, 39 via knockouts, and 12th title. 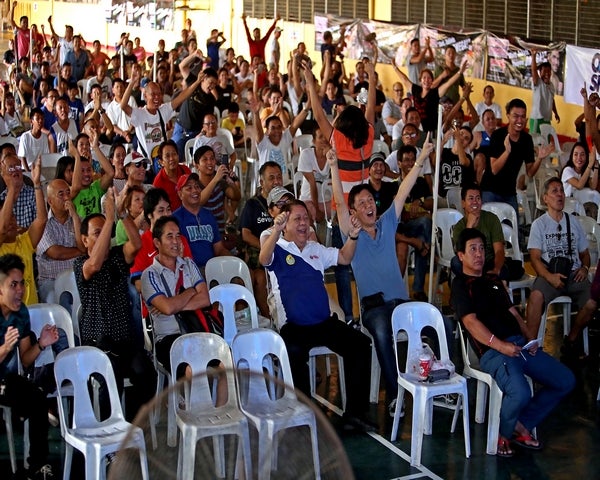 His complete mastery over his Argentinian rival had the audience shouting one name for his next oppenent: Floyd Mayweather Jr.

Mayweather beat Pacquiao in their record $300-million fight in 2015.

But Pacquiao was coy to the idea.

“’Di ba retired na siya? Hayaan nalang nating ganyan. Pero pag maisipan niyang bumalik, nandito lang tayo (Isn’t he retired? Let’s leave it that way. But if he wants to get out of retirement, I am just here),” he quipped.

And while Pacquiao waits for that mouth-watering rematch to happen, he said he will continue to fight.