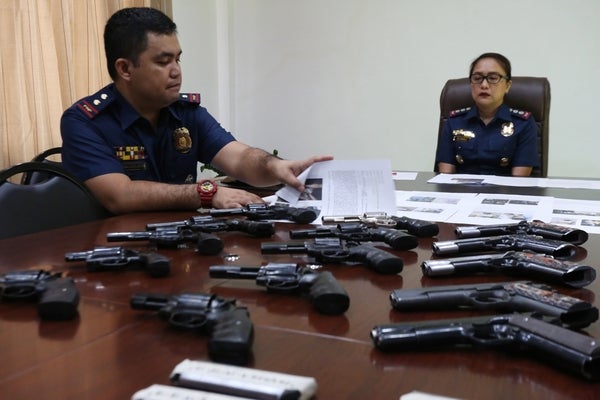 CEBU City Police Office Director Senior Supt. Royina Garma said they are coordinating with the officials of the municipality of Marabut in Samar province to determine the owner, origin and destination of the 14 short firearms that were recovered from the baggage compartment of their bus on Thursday night.

The bus was already boarded on a roro ship bound for Samar when police received a tip that it carried firearms.

Marabut, a fifth class municipality is headed by Mayor Elizabeth Ortello who as of press time is yet to issue a statement regarding the incident.

Garma wants to know why a government bus is in Cebu.

Garma said she would ask the Criminal Investigation and Detection Group-7 to help in the investigation.

Authorities are also not discounting the possibility that the intercepted firearms will be used by a private army for the 2019 national and local elections.

The province of Samar is a known election hotspot.

Meanwhile, Chief Insp. Hector Amancia, Deputy Regional Chief of CIDG-7 said their immediate task is to identify the persons involved in the transport of the recovered firearms.

Amancia said that they will also investigate the management or the owner of the truck company to shed light on the matter.

This developed as the police believed that this is not the first time that the transport of illegal firearms has happened.

The police also said that those arrested reportedly told them that a public official owns the seized firearms but refused to name names.

Meanwhile, charges for illegal possession of firearms will be filed next week against those arrested.

Read Next
Japanese nabbed for molesting girl; minor’s parents may be charged too