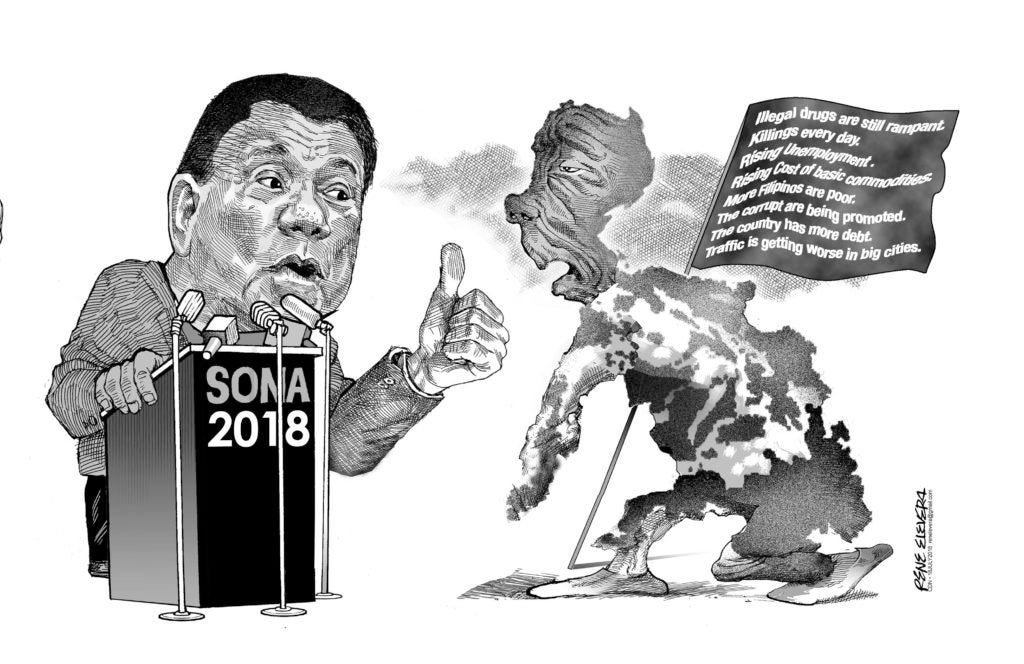 We have no indication from the administration of President Rodrigo Duterte that it is seeking redemption. But if it is, it should start with nothing less than an honest report today about the state of the nation.

The State of the Nation Address (Sona) is normally an occasion for the President to trumpet his achievements in the past year.

While we expect President Duterte to deliver a progress report, we would be shortchanged if he fails to say a word about the many setbacks we have suffered under his watch.

If he uses the Sona pulpit as a mere stage for pitching his plan to change the Constitution to pave the way to a federal form of government, he would be in no position to blame critics who would take him to task for ignoring emergencies.

For it is not with the promise of an altered form of government that we, the people, will gauge the performance of Duterte in his recently concluded second year in office.

Neither will we judge his presidency’s second year on semiotics from the Sona live feed under the direction of Joyce Bernal or on the tired presidential expletives that will entertain only true-blue Duterte junkies.

China is already administering otherwise sovereign Philippine territory in the West Philippine Sea. Our Moro brothers and sisters feel disadvantaged, their neighbors confused in the version of the Bangsamoro Basic Law that is among Duterte’s advocacies.

The President should answer for threats to our territorial integrity. At least 5,000 people have been killed by police in the crackdown against illegal narcotics. At least 23,000 potentially drug-related deaths are under investigation. Lumads are being killed, injured, and displaced in military operations. Killing has replaced due process of law in crimefighting and has not spared innocents like Cebu’s Bladen Skyler Abatayo, 4. The President should answer for violence against citizens at the hands of the State.

Unemployment remains above 5 percent. That translates to at least five million Filipinos without jobs. Prices of commodities are skyrocketing. The peso is now the weakest currency in Southeast Asia. The number of Filipinos who describe themselves as poor has increased.

Our national debt has ballooned and the government plans to borrow some more. The President should answer for economic conditions that are inimical to the common good. Corruption has plagued the executive department to little consequence.

As of June 28, of the government executives sacked under the Duterte administration over corruption or misconduct allegations, 20 have not been sued, four have been reappointed, and one was retained in government. The Commission on Audit has flagged billions of pesos in misspent public money at the tourism department and millions in unliquidated cash advances under the Office of the President.

The President should answer for corruption in his official family. The people will not be fooled. Presidential silence on the issues we raised, amid a pliant Senate, Lower House, and Supreme Court will reek of an unhinged leadership out of tune with the true democratic sovereign, drunk on its indulgence of its authoritarian fetishes.