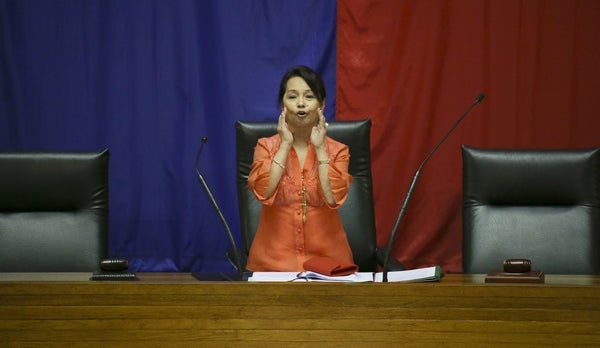 In a surprise move on Monday, former president and now Pampanga Rep. Gloria Macapagal Arroyo took her oath as new Speaker of the House of Representatives.

Minutes before President Rodrigo Duterte’s State of the Nation Address, Arroyo was seen taking over the rostrum.

She was later seen taking her oath before a lawmaker.

The microphone at the podium was notably turned off as Arroyo was taking her oath. She was also seen saying something to legislators before the oath-taking.

While Arroyo was at the podium, ousted Speaker Pantaleon Alvarez was seen welcoming Duterte at the House.

“Mukhang ako pa rin naman,” was all that Alvarez said on Arroyo’s takeover when sought for comment.

Duterte was scheduled to deliver his State of the Nation Address at 4 p.m.

Before this, talk of Arroyo taking over the Speakership from Alvarez broke out just before the opening of the session at 10 a.m.

But the House adjourned the session without the expected change in leadership.

Camarines Sur Rep. Rolando Andaya Jr. was supposed to raise his objection to the adjournment of the session earlier when the audio of the livestream was turned off.
House plenary was temporary off-limits to media.

Thousands of protesters have jeered Pampanga Rep. Gloria Arroyo’s rise to the position of House Speaker just minutes after she took her oath.

Former Speaker Pantaleon Alvarez was removed after a manifesto seeking his ouster was reportedly signed by a majority of lawmakers.

But for Cebu City Mayor Tomas Osmeña, Alvarez’s ouster was a wish granted ahead of his 70th birthday on July 26.

Osmeña said that Alvarez is an ally of Michael Lloyd Dino, the presidential assistant for the Visayas, and Mabolo Barangay Captain Niña Mabatid who is eyeing the presidency of the Association of Barangay Councils (ABC).

“Alvarez has no more influence,” he said. / with reports from USJ-R Intern Gerard Vincent Francisco