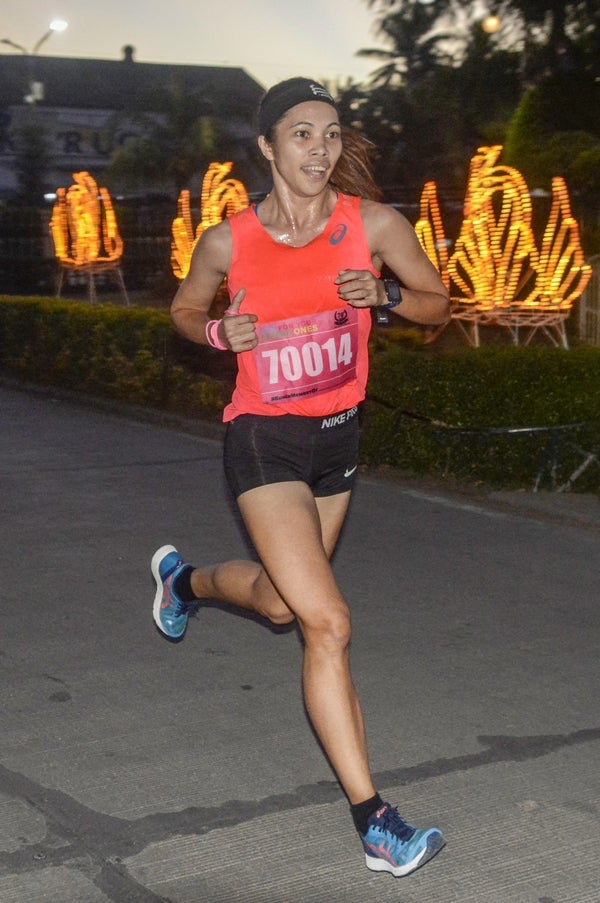 Ruffa Sorongon plies through the 5k race course of the Run For Your Loved Ones yesterday en-route to win the 25-below category. CDN PHOTO/CHRISTIAN MANINGO

RIDER Omega Tri Team’s rising runner, Joseph Arnel Emia, and Ruffa Sorongon easily logged victories in the lone 5-kilometer distance of the first “Run For Your Loved Ones” of the Cosmopolitan Funeral Homes that started along Salinas Drive in Barangay Lahug and finished at the Plaza Independencia, Cebu City yesterday.

Emia and Sorongon were both fresh from their dominant win in the 21-K distance of the 8th Saint Ignatius Run last July 22 at the SM City Cebu. And yesterday, they proved that they are also capable of winning a short distance footrace by clinching the top spots in their respective categories.

In the 30 years old category, the 29-year-old Emia, a native of Ginatilan, west Cebu, clocked 15 minutes and 29 seconds to beat Michael Largo who settled for second with a time of 15:56. Kenyan James Mebei landed at third after crossing the finish line at 16:13.

Boholano multi-titled ultra marathoner Desiderio Engbino of Spectrum Runners Club of Cebu settled for fourth place after clocking 16:37 while Peter Canumay grabbed the fifth spot with his time of 17:28.

In the distaff side, Gel Monsanto claimed the top spot with a time of 20:19 while Sandra Sollano came in second with her 20:26. Azalea de Jesus settled for third after clocking 21:54. Felrose Mejorada (22:59) was at the fourth place while Jennifer Sabellon (25:22) placed fifth.

In the 25 Below category, Sorongon of Sultan Kudarat breasted the tape at 17:38 beating Spectrum Runners Club’s Eva Mae Villarin who clocked 18:35. Melody Perez placed third with her time of 18:49. She was trailed by Mary Joy Loberanis who clocked 19:35 while Geneda Arquino rounded up the top five with her time of 19:57.

Prince Joey Lee ruled the men’s 25 and Below with his time of 14:40 while Roel Algofera settled for second after clocking 15:00.

Agustin Ychon came in at 15:09 to complete the top three finishers followed by Arnel Florentino (15:47) at fourth and Jemar Morales (16:37) at fifth place.

Read Next
No stone left unturned as IM70.3 nears