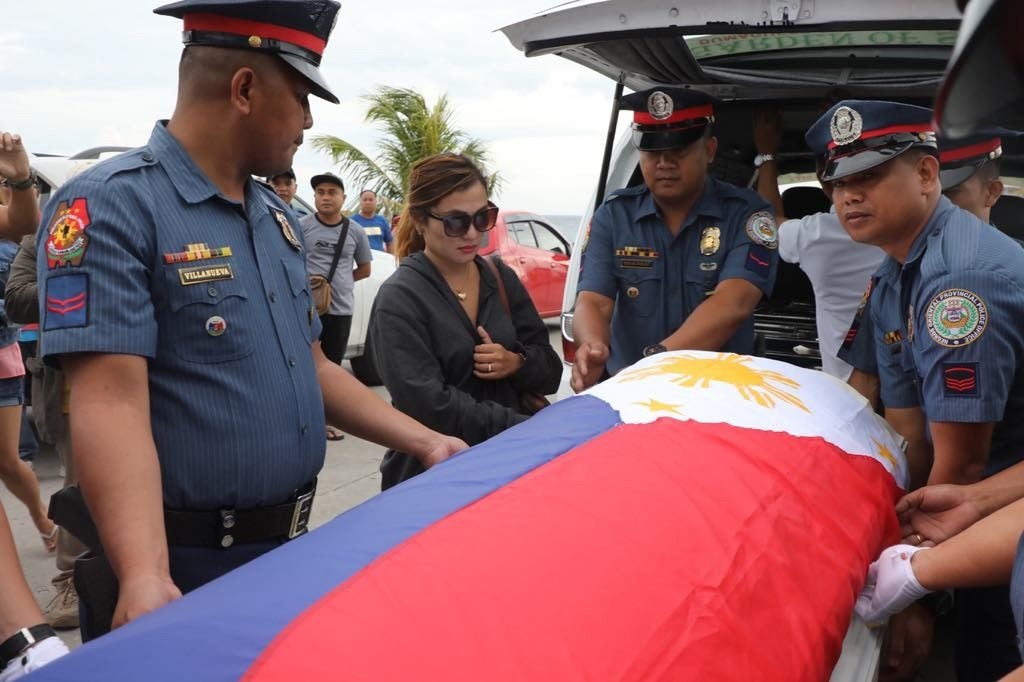 The flag-draped coffin of PO3 Eugene Calumba is received and carried by personnel from the Negros Oriental Provincial Police Office at the Liloan Port in Santander, Cebu, who will escort his remains on board a vessel bound for Dumaguete City on Aug. 1, 2018. Looking on is Calumba‘.’s widow, Rosemarie. | CDN PHOTO/TONEE DESPOJO

From a victim of a failed slay attempt, Tejero Barangay Councilman Jessielou Cadungog is now officially a suspect after murder and frustrated murder charges were filed yesterday against him and his bodyguard by the Criminal Investigation and Detection Group in Central Visayas (CIDG-7) over the killing of a policeman last Monday.

Chief Insp. Hector Amancia, officer in charge of CIDG-7, brought in two witnesses, including a minor, to the Cebu City Prosecutor’s Office on Wednesday to prove that Cadungog was with his bodyguard William Macaslang Jr. on board a Toyota FJ Cruiser when the latter gunned down PO3 Eugene Calumba along T. Padilla Extension in Cebu City.

Another CIDG-7 witness was Michael Banua, an anti-crime volunteer, who drove the motorcycle boarded by Calumba when the latter was killed.

The filing of the criminal complaints against Cadungog and Macaslang, have become the final twist in the case where Calumba and Banua, the driver of the motorcycle the policeman was riding, have become the victims instead of the alleged perpetrators in the attempt against the life of the councilman.

“The witnesses testified that Cadungog was inside the vehicle when the shooting happened,” he said.

Cadungog has repeatedly denied the accusations, saying his bodyguard dropped him off near the village hall of Tejero shortly before the shooting incident took place.

Macaslang is facing a separate homicide case for admitting that he had killed Calumba in self-defense after he saw a man, who was later identified as Calumba, attempted to pull out a gun.

It was Macaslang’s confession that prompted the National Bureau of Investigation in Central Visayas (NBI-7) to file homicide charges against him at the city prosecutor’s office last Tuesday.

NBI-7 Director Patricio Bernales said they have yet to gather enough evidence against Banua.

Both Cadungog and Macaslang have been safeguarded by NBI-7 agents after the two, accompanied by Cebu City Mayor Tomas Osmeña, sought the agency’s protection last Monday. The mayor brought them to the NBI after Chief Supt. Debold Sinas, director of the Police Regional Office in Central Visayas (PRO-7), ordered their arrest.

To recall, Sinas rushed to the CIDG-7 headquarters in Cebu City last Monday after the shooting incident to talk to Banua, where the latter was given protection.

Banua, who was caught and mauled by Tejero residents after the shooting of Calumba, was taken into the hospital by Cebu City Councilor Dave Tumulak. The councilor was supposed to bring Banua to the police and later to NBI-7 after his treatment but Banua was instead sequestered by Senior Insp. Joemar Pomarejos, chief of the Waterfront Police Station, and was brought to the CIDG-7 headquarters.

Police authorities then revealed that Calumba, who was assigned at the Parian Police Station, was on an anti-drug surveillance operation in the area with Banua, a police asset, when he was killed.

In a press conference on Wednesday, Sinas revealed that Cadungog, a former barangay captain and now councilman of Tejero, was the subject of the surveillance operation as the village official was allegedly in the drugs watchlist of President Rodrigo Duterte and the police.

Senior Supt. Royina Garma, director of the Cebu City Police office (CCPO), said they were now coordinating with the Firearms and Explosives Office (FEO) to revoke Cadungog’s license to own and posses firearms.

“License to own and posses is a privilege and not a right. When you used it to a crime then it is only right that the government will revoke (your license). And in this case, his gun (Cadungog’s) was used to shot the victim (Calumba),” Garma said.

Once the FEO revokes Cadungog’s permit to possess firearms, Garma said the councilman must surrender all his guns.

“If he won’t, we will look for all his firearms,” said Garma.

Garma said that they were also determining if they would file obstruction of justice and physical injuries charges against Tumulak for allegedly punching Banua and for taking hold of some pieces of evidence at the crime scene.

Tumulak has repeatedly denied the allegations, saying he was even the one who saved Banua from angry bystanders and brought him to the hospital for treatment.

While he admitted he got hold of the identification cards of Banua, Tumulak said they were given to him by the nurse while the man was getting treatment.

He said he wanted to turn over Banua’s belongings to the police but no one wanted to get it. He eventually handed it to Osmeña who, in turn, surrendered them to the NBI.

In an interview on Wednesday, Osmeña described the decision of the police to twist the story and file charges against Cadungog and Macaslang as “stupid.” (see separate story)

Macaslang was driving the councilman’s FJ Cruiser at past 8 a.m. on Monday when he noticed that two men riding in tandem on a motorcycle drove up to his side.

He said he saw the passenger of the motorcycle pulling out a gun from his waistband, prompting him to get his own firearm and shoot and killed the man. The backrider turned out to be Calumba. Banua, the driver of the motorcycle, was collared by barangay tanods and bystanders.

But the police led by Sinas claimed that Cadungog and his bodyguard were the ones who attacked Calumba unprovoked.

Lawyer Renato Galleon, Cadungog’s legal counsel, said they were confident that the city prosecutor’s office would throw out the murder charges filed by the CIDG-7 against his client and Macaslang.

“They could not make out a murder case out of it. It is even dubious if they can make a homicide case out of it,” Galleon explained.

Although Macaslang admitted that he shot Calumba, Galleon said it was done in self-defense.

“Calumba and Banua tried to ambush my client who simply protected himself,” he said.

Both Cadungog and Macaslang were also brought to the Waterfront Police Station on Tuesday where they were booked after CIDG-7 conducted a “constructive arrest” — a term used when a law enforcement agency effected an arrest on suspects who were already in custody of another law enforcement agency.

The arrest was part of the procedure for the filing of murder charges against the two.

Despite the “constructive arrest,” however, Cadungog and Macaslang remained in the custody of NBI-7.

Meanwhile, the body of Calumba was transported yesterday from the Cosmopolitan Funeral Homes in Nivel Hills, Barangay Lahug, Cebu City to Dumaguete City in Negros Oriental.

The wake is now being held at the Garden of Saints Memorial Chapel in Barangay Camanjac, Dumaguete City.

His wife Rosemarie said the 33-year-old Calumba will be laid to rest at the Garden Memorial Park in Dumaguete City.

“In behalf of our family, we thank the police organization for its continued support,” she told Cebu Daily News. / WITH REPORTS FROM CORRESPONDENT FUTCH ANTHONY INSO