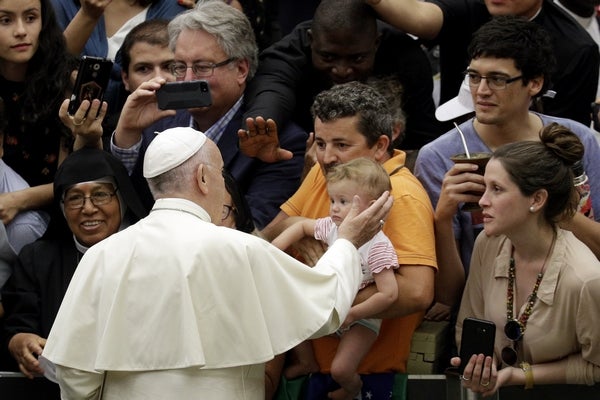 Pope Francis caresses a child as he arrives in the Paul VI hall at the Vatican for his weekly general audience, Wednesday, Aug. 1, 2018. ap

Pope Francis has declared the death penalty “inadmissible” in an update of Catholic believers’ most important guide to Church teaching, the catechism, the Vatican said Thursday.

“The Church teaches, in the light of the Gospel, that ‘the death penalty is inadmissible because it is an attack on the inviolability and dignity of the person’,” the new text states.

The move comes after decades of hardening opposition from the Church to capital punishment, with Francis and his predecessors Benedict XVI and John Paul II all making similar pleas for it to be stopped.

John Paul II called for its abolition on a visit to the United States in 1999, while Benedict XVI said there was “the need to do everything possible to eliminate capital punishment,” without ever going as far as to ask for an edit of the catechism.

The Community of Sant’Egidio, an association that represents Christians in 70 countries and a long-time campaigner against the death penalty, expressed “joy” at the move.

“The Pope’s decision is a further push to the Church and Catholics, beginning with the Gospel, to respect the sacredness of human life and to work in every continent towards the abolishment of this inhuman practice,” the association said.

More than two-thirds of countries — including most predominantly Catholic states — have abolished or suspended judicial killings. However, human rights organization Amnesty International recorded at least 2,591 death sentences in 53 countries and nearly 1,000 executions in 2017 alone.