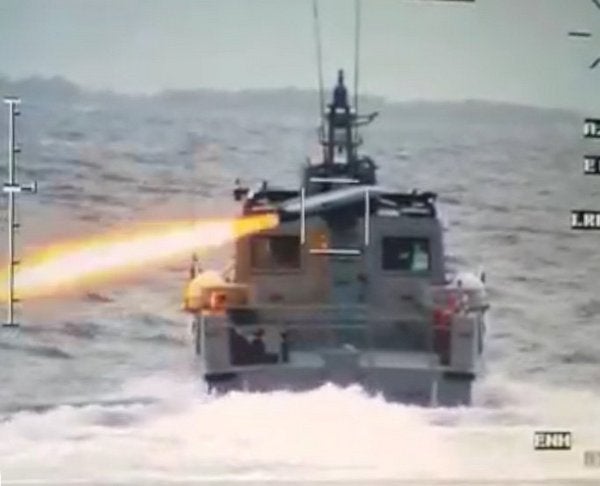 Photo from the actual test of the Spike ER missile system held at the Manila Bay on Thursday. /PH Navy

The Philippine Navy on Thursday announced that it has successfully tested its first missile system in the vicinity of Lamao Point, Bataan.

“The target was hit dead center even if the sea state condition was moderately rough with a wave of at least one meter high but within the normal firing conditions of the missile,” he said.

Inquirer.net obtained a short video of the actual test launch showing how the missile successfully hit the floating target.

The Spike ER short-range missiles were delivered to the Philippines from Israel last April. The missiles have a range of eight kilometers and will be installed in three attack crafts.

Last May, Empedrad said the missile system will likely be deployed to Palawan and the Zamboanga Peninsula.

The round of tests conducted in Bataan included sea acceptance tests (SAT) for the Mini Typhoon Machine Gun Systems and the Spike-Extended Range Missile Launching System.

Zata said the SAT is necessary to test, inspect and accept the weapons based on the Philippines’ contract with Israel.

The Navy said Vice Admiral Robert Empedrad, Navy chief, together with other senior officers and Defense Acquisition Office representatives, witnessed the historic missile live fire testing on board an MPAC.

Teams from Rafael Advanced Defense Systems Ltd. and the Technical Inspection and Acceptance Committee of the Department of National Defense oversaw the test firing activity.