40 fire victims may not be allowed to rebuild homes 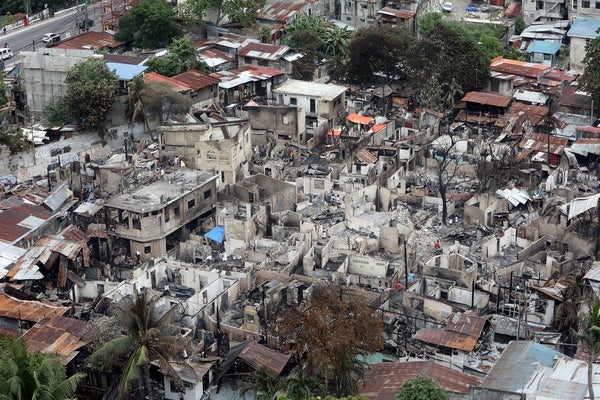 At least 10 families or 40 victims of last August 4’s Barangay Kamputhaw fire may not be able to return and rebuild their burnt homes.

This developed after the City Hall’s Division of the Welfare of the Urban Poor (DWUP) found out that their structures, which were destroyed in the fire,stood on a lot owned by the University of the Philippines Cebu (UP Cebu).

Genevieve Alcoseba, DWUP operations officer, however, said they were still waiting for any statement from UP Cebu.

She said that they had advised the affected families, who were found to encroach on the university’s property, not to return to the area and rebuild their houses yet.

“Makig-negotiate pa mi sa UP regarding sa yuta before ta maka-proceed unsay sunod nga lakang atong himoon (We have to negotiate with UP first about the property before we can proceed on the next steps to take),” said Alcoseba.

DWUP recommended for a reblocking in the site to avoid future fire incidents, since the site only had a pathway, which made it hard for the firefighters to enter the area during the August 4 fire.

However, they are still processing the necessary documents before doing a reblocking considering that 217 families are among the beneficiaries of the 93-1 land swap deal between the city and the Cebu Provincial Government.

Around 134 structures were burned down in the fire that struck Purok 3, Barangay Kamputhaw, Cebu City last Saturday.

Over 227 families or 900 individuals were affected by the incident. /  Zena V. Magto, USJ-R Journalism Intern

TAGS: 40, fire, homes, may not be allowed, rebuild, victims