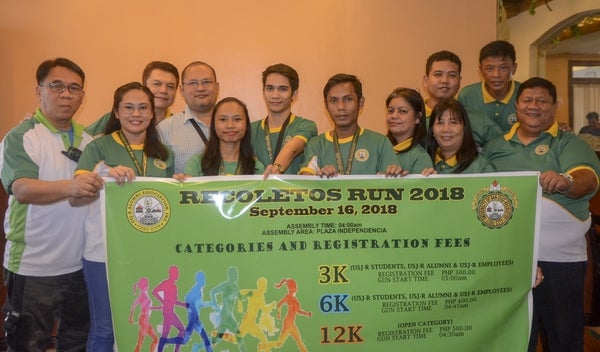 USJ-R Alumni Association Inc. officials are joined by their scholars to promote the upcoming 6th Recoletos Run on September 16, 2018 at the Plaza Independencia. CDN PHOTO/CHRISTIAN MANINGO

For Marchel Rom Olivar, an electrical engineering graduating student of the University of San Jose-Recoletos, she could not have reached this far in her studies without the generosity of the USJ-R Alumni Association Inc. And, that is why she committed to helping out her benefactors in the sixth staging of the Recoletos Run slated on September 16 that will start and finish at the Plaza Independencia.

Olivar, who will be graduating next year, is just one of the beneficiaries of the USJ-R Alumni Association Inc. who enjoys a full scholarship. And, to continue this noble cause, the officers of the alumni association will be holding the sixth edition of its annual running event with a more ambitious target number of runners.

One of the organizers, Engr. Jojo Flores, who also serves as one of the alumni association’s board of trustees, said that they already secured 2,000 entries of USJ-R freshmen who already pre-registered for the run before the semester started as part of their Physical Education activity.

Although the number already surpassed the record number of runners that they had during the run’s second year of staging with 1,088 in 2014, the organizers are aiming to draw a thousand participants more who are non-USJ-R students, faculty members or alumni, on race day.

The organizers are encouraged to continue holding this running event every year because they want to make many deserving students a beneficiary of their scholarship program.

“Without them, I wouldn’t be here right now. I am very thankful for giving me the chance to become one of their scholars. The alumni association is very hands-on when it comes to guiding us and helping us in our academic duties,” said Olivar during the press conference yesterday at the Vienna Kaffehaus.

According to Flores, three scholars have already gotten their degree through the Alumni Association’s scholarship program. Olivar and four others are their current scholars and they are planning to add more in the next semester.

The running event, which is part of the annual USJ-R intramurals, has three distances — 3k, 6k and 12k and will start at 4 a.m.

The top three finishers in all three distances, both male and female, will receive cash prizes and medals. The 3k and 6k prizes, however, are only exclusive to the USJ-R students, alumni members and faculty. Only the 12k is an open category.