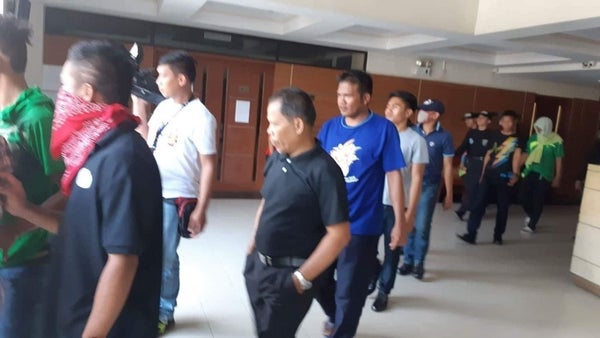 The 43 persons allegedly involved in the violent takeover of the Mactan Isla Resort and Casino in Barangay Agus in Lapu-Lapu City are brought to the Lapu-Lapu City Prosecutor’s Office for their inquest proceedings. CDN PHOTO/NORMAN MENDOZA

Forty three persons made up of 33 security guards, 7 Korean nationals and 2 Filipino translators, will each be facing four cases in court with regards to their armed assault on Friday to take over the Mactan Isla Resort and Casino.

Supt. Eloveo Marquez of the Investigation and Detection Management Branch (IDMB) of the Lapu-Lapu City Police Office said that each of the 43 arrested persons would be facing charges of grave threats, grave coercion, slight illegal detention and obstruction of justice.

The 33 security guards, who stormed the resort on Friday were connected to the Proceed Security Agency based in Cagayan de Oro City and were allegedly under the employ of the Park family, who are the majority stakeholders of the Mactan Isla Resort and Casino in Barangay Agus, Lapu-Lapu City.

Initial investigation on Friday’s incident showed that the Park family security guards stormed and took over the resort.

The move was an offshoot of a property dispute between the owners of the resort, which is run by a minority owner.

On Monday, the 43 accused underwent an inquest proceeding at the Lapu-Lapu City Prosecutor’s Office with Fiscal Aida Castillo handling the proceedings.

Lawyer Gerry Carillo, counsel of the 43 accused persons, said they would also file counter charges against the 14 security guards of the Blue Breed Security Agency, who were securing the resort.

“But what we wanted right now is the immediate filing of the case so we can work on the bail of my clients for their temporary release,” said Carillo.

The 43 arrested persons were detained at the Lapu-Lapu City Police Office detention cell since their surrender to the police and arrest last Friday.

Pablo Aloyan, Mactan Isla Resort and Casino manager and corporate secretary, said they planned to file frustrated murder cases against the guards who fired their guns during Friday’s incident.

Aloyan said they planned to do this after they had identified these guards after reviewing the footage from the security cameras during the incident.

Senior Supt. Limuel Obon, Lapu-Lapu City Police Office director, said that the hotel management was placed at status quo so as not to hamper its operations.

The Mactan Isla Resort and Casino stockholders had long been in an intra-corporate dispute and the case is still under court litigation.

Carillo earlier denied that he was aware of the Park family’s plan to forcibly take over the hotel resort but he said that his clients were just asserting their right to the property being its majority stockholders.