Cop’s pa: End speculations on my son’s death, let him rest in peace 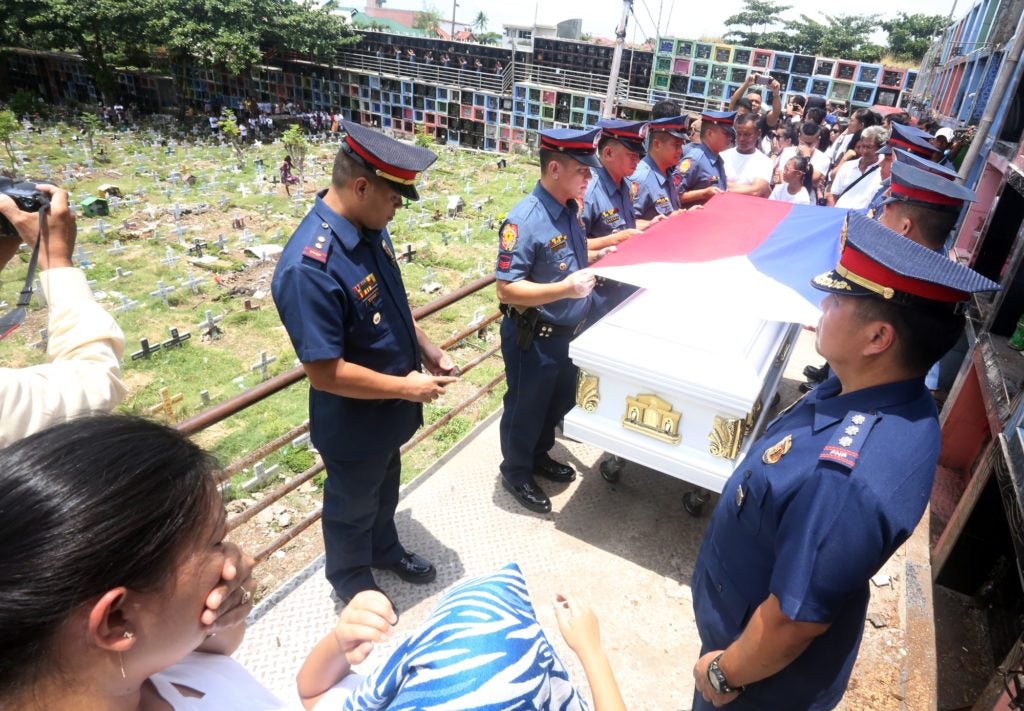 SPO1 Roderick Balili, the police officer who died in an accidental firing incident, has finally been laid to rest at the Pardo Cemetery. Balili was given full funeral honors, with police officers as pallbearers and a 21-gun salute to send him off to his final resting place.
CDN PHOTOS/LITO TECSON

THE father of SPO1 Roderick Balili has appealed to the public to end all speculations about the circumstances of his son’s death and let his son rest in peace.

Hilario Balili, 63, made this appeal after the burial of SPO1 Balili at the Pardo Cemetery on Sunday.

“I will not talk anymore. I hope the people will already end their speculations on my son’s death, Tama na unta ato nang papahulayon ang akong anak (That is enough. Let’s just let my son rest in peace),” Hilario told Cebu Daily News in an interview on Sunday.

Hilario was referring to reports linking the police officer to the attack of a Philippine Drug Enforcement Agency (PDEA) agent in Carcar City on August 8.

PRO-7 Director, Chief Supt. Debold Sinas, has earlier reiterated that Balili died of wounds from an accidental firing in an operation in Pinamungajan town in southern Cebu and not from what reports had stated that he was allegedly involved in a shootout with a PDEA agent.

On Sunday, SPO1 Balili was buried with full honors at the Pardo cemetery.

Police officers carried his coffin from the St. Peter’s Chapel at Barangay Imus in Cebu City to the hearse that brought him to the Pardo Cemetery — an estimated 10 kilometer journey to his final resting place.

A Requiem Mass was held at the cemetery’s chapel, which was officiated by Fr. Gerardo Dela Victoria.

After the Mass, the PRO-7 Band played as the police officers as pallbearers carried SPO1 Balili’s coffin to his final resting place – a 100-meter walk from the chapel.

A few minutes later, shots rang out – a 21-gun salute for a fallen comrade – part of the full funeral honors for a fallen police officer, who died of what the police called accidental firing of his gun during a legitimate operation.

After the 21-gun salute, the police officers folded the flag draped on the coffin of SPO1 Balili and gave this to his wife.

Tears of sorrow and occasional wails of grief were heard among the crowd of relatives and friends of the fallen police officer as SPO1 Balili’s coffin was placed inside the niche, his final resting place.

Lee said that Sinas could not make it to SPO1 Balili’s burial because his flight from Metro Manila to Cebu was canceled.

“We are here to give support and also give sympathy to the grieving family,” Lee said.

He also assured the family that now that SPO1 Balili had finally been laid to rest, the family would soon receive the benefits of the police officer.

“Actually ongoing na po yong pag-aasikaso ng mga benepisyo sa mga naulila na pamilya (Actually, the processing of the death benefits of the police officer had been ongoing and they would expect the family to receive the benefits soon),” Lee added.

He said that the wife and Balili’s son would receive pensions from the Philippine National Police and the remaining salary of the fallen police officer.

Read Next
Employers told: Heed Aug. 21 wage order or else …