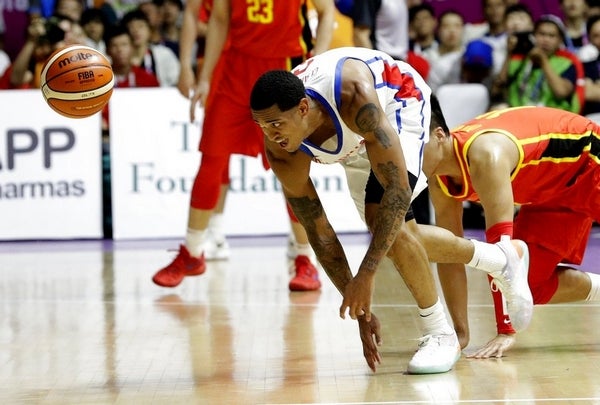 Gilas Pilipinas’ Jordan Clarkson chases a loose ball during their Group D match versus China in the men’s basketball 5×5 competition of the Asian Games in Jakarta, Indonesia. /AFP

CHINA escaped Jordan Clarkson and the Philippines, 82-80, to open its campaign in the 2018 Asian Games at GBK Basketball Hall in Jakarta, Indonesia.

Jordan Clarkson battled an apparent case of cramps in the fourth quarter but kept the Filipinos in the fight after three quarters where he scored much of his game-high 28 points in his Philippine debut.
The Philippines took an 80-77 edge after a fearless drive by Stanley Pringle with only 1:23 left before China, behind Zhao Rui, rallied and ended the game on a 5-0 spurt.

Paul Lee, who, along with Christian Standhardinger and Pringle stepped up when Clarkson was on the bench in the crucial stages of the fourth quarter, had a great look but just couldn’t get the potential game-winning triple to go as China ran the clock out.

Zhou Qi led the Chinese on both ends as he and fellow big man Wang Zhelin gave the Philippines’ fits with the Houston Rockets center scoring 25 points.

With the Philippines dropping to 1-1 and China tipped to beat Kazakhstan in its next game, the Filipinos will likely face another fierce rival in South Korea in the knockout stage.

The Philippines blew out Kazakhstan, 96-59, on Thursday.

Standhardinger, who was unfazed by the bigger Chinese big men, finished with 18 points while Pringle and Lee contributed 14 and 10 points, respectively.