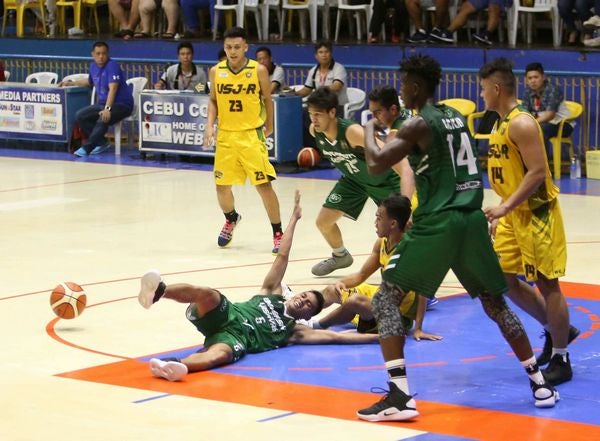 Gileant Delator of UV falls to the floor as the ball goes loose in this bit of Cesafi men’s basketball game between the Green Lancers and the USJ-R Jaguars at the Cebu Coliseum. Lito Tecson

The University of San Jose-Recoletos (USJ-R) Jaguars started their campaign this season with a massive upset as they took down the reigning champions University of the Visayas (UV) Green Lancers, 89-73, in the 2018 Cesafi men’s basketball tournament last night at the Cebu Coliseum.

USJ-R led by as many as 19 but UV trimmed the deficit down to five, 68-73, behind a huge uprising led by Suerte.

The Jaguars refused to wilt under pressure and fought right back behind the efforts of man-mountain Ewinike, who scored an and-one, a putback before slamming one in off a gorgeous alley-oop that helped them go back up 83-68 with just 2:24 to go.

Also getting a win was the University of San Carlos (USC) Baby Warriors, which beat the USJ-R Baby Jaguars, 69-56.

In the 12-under division games, USC bested guest team Sisters of Mary-Boystown, 50-42, while CEC destroyed the Cebu Institute of Technology-University, 81-24.