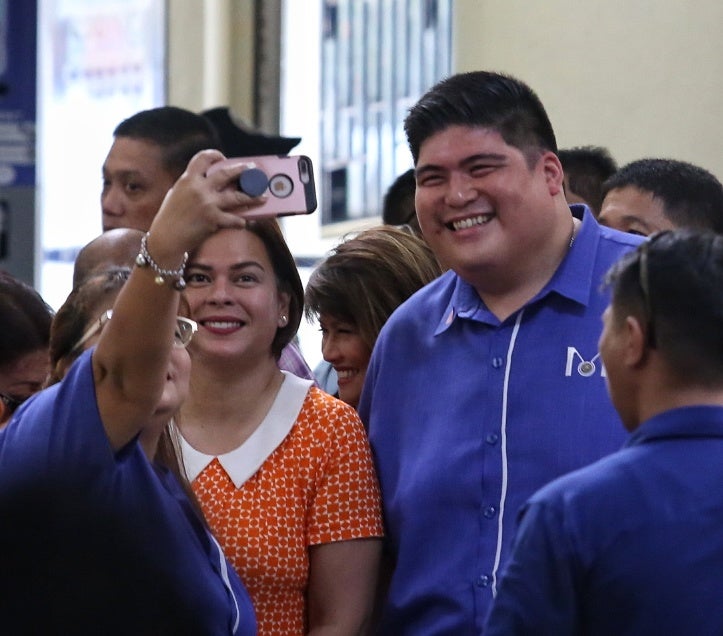 Davao City Mayor Sara Duterte asked for the support of Mandauehanons in next year’s senatorial race.

But not for herself.

Speaking at the 49th Charter Day Celebration of Mandaue City at the Mandaue City Cultural and Sports Complex yesterday afternoon, Mayor Duterte reiterated that she is not running for senator in the 2019 elections.

(My second message is to ask you people of Mandaue this coming 2019 elections. Maybe you’re thinking if I will be running for senator. I will not run for senator)

“But I’d like to solicit your support for senators in the 2019 elections,” she added.

She first mentioned former Senator Jinggoy Estrada whom she personally brought to Cebu to attend yesterday’s celebration in Mandaue City.

She then mentioned Gov. Marcos who, according to her, has known a lot of people in the entire country because of her work as former chairperson of the Kabataang Barangay.

All three of them were present during the event and were also given opportunities to speak to the crowd inside the complex. The event was attended by Mandaue City officials, City Hall department heads, employees, and other guests.

Prior to asking for support for the three senatorial hopefuls, Mayor Duterte thanked the attendees for supporting her father’s presidential candidacy in 2016.

The mayor added that she plans to run again as mayor of Davao City in 2019.

For his part, Estrada joked that he “gate-crashed” the event as he was not invited by Mandaue City Mayor Luigi Quisumbing and was only brought by Mayor Duterte.

He also joked that it was “hard” to be in jail, alluding to his detainment following graft and plunder charges over his alleged involvement in the multibillion-peso “pork barrel” scam. He emphasized that he had not committed any crime and that his conscience is clear.

At the same time, he also personally pushed for the candidacy of Gov. Marcos as senator.

(I will campaign even if it’s not allowed. No one will sue me anyway and I’m used to being imprisoned. Gov. Imee Marcos is the daughter of a former president. We need to help her get to the Senate.)

For his part, Nograles said in his speech that he was surprised by Mayor Duterte’s endorsement.

He proceeded on talking about updates on some national issues, being the chairperson of the Committee on Appropriations.

For one, he said they will continue putting funds for the free tuition and miscellaneous fees for students in state universities and colleges nationwide which was recently signed into law by President Rodrigo Duterte, as well as the new law providing for free irrigation for farmers.

Another thing he highlighted is the newly signed law on the Free National ID which he said people have been asking for in several administrations already.

On the issue of rice supply, Nograles said that Congress will be investigating next week some officials of the National Food Authority (NFA) on the use of some government funds for payment of debts when it was appropriated for the purchase of stocks of rice.

For her part, Gov. Marcos also delivered a speech, but it was before Mayor Duterte’s speech and endorsement.

She congratulated the local government of Mandaue City and recalled how her father, former President Ferdinand Marcos signed the law establishing Mandaue as a chartered city.

“In 1969, my father decided that it is time for Mandaue to become a chartered city. Everyone questioned that decision saying it was a mere political accommodation, a move to downgrade Cebu City,” she said.